Next Unit: Changes in an Infant After Birth 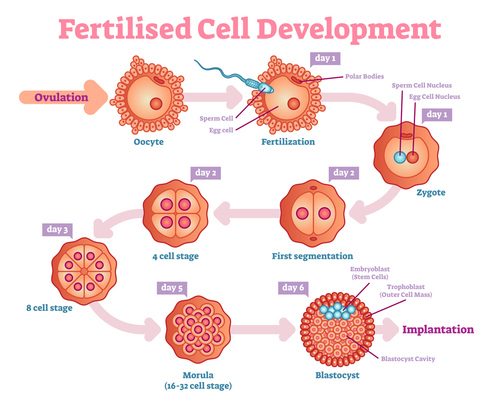 Gestation is the amount of time needed to "form" the baby in preparation for it to survive outside the mother's body. The average gestation period is 281 days or about forty weeks from the first day of the female's last menstrual period.

EDC: The medical term for the due date is known as the estimated date of confinement or EDC--a traditional term that refers back to the times when women were "confined" to the bed for several days to weeks after giving birth. Note that this means the first two weeks of the cycle are counted in the 40 weeks, before fertilization and implantation. It's inaccurate (should be 38 week--from conception), but it's tradition, and tradition is hard to kill. (See the real beginning, at Week 2, below.)

When a fertilized egg attaches to the endometrium, the cycle ends by progressing into a constant state of estrogen and progesterone support for the ensuing pregnancy.

Week 2: Until fertilization, the two weeks prior are not technically "pregnancy," but hormonal posturing leading to ovulation in preparation for fertilization.

The "REAL" beginning: at around two weeks of gestation, the ovum is fertilized and mitotic cellular division occurs forming a blastocyst. (As above, for the sake of convenience and arithmetic, these first two weeks aren't actually "gestation," since pregnancy doesn't begin, technically, until fertilization.)

Fertilization occurs in the mother's fallopian tube--an active transport tube that carries an ovulated egg along its course from the ovary toward the uterus, so by the time the egg reaches the uterus, it is already either fertilized (having met up-swimming sperm there) or unfertilized.

At the uterus, the egg migrates into the uterine cavity. If it is a fertilized egg, this blastocyst ruptures from its protective protein shell and implants into the endometrial lining of the uterus.

Week 3: the beginnings of the yolk sac and placenta development as the blastocyst implants deeper into the endometrium. Around this time, there may be some vaginal spotting noted by the mother, called "implantation bleeding"--completely normal.

Week 4: (blastocyst → "EMBRYO"): The development of the spinal cord, brain, vertebra, and heart begin. The blastocyst is now considered an embryo.

Week 5: the heart begins to beat, the ears begin to form, and arm, lungs, mouth and other organs start to develop.

Week 7: continued lung formation, the addition of digits to hands and feet, and the beginning of the lymphatic system and development of sex organs.

Week 8: the formation of nipples and hair follicles begins; spontaneous limb movements can by be detected by ultrasound.

From this point, the fetus is not as sensitive to damage from environmental exposure as the embryo was, but toxic exposure still can cause physiological abnormalities or minor congenital defects. The riskiest times are Weeks 6-9 for toxic exposure to the pregnancy.

Weeks 10-12: there is continued growth of the organs, the formation of a face, beginnings of teeth, well-differentiated genitals, red blood cells being produced in the liver, and a detectable heartbeat via Doppler or ultrasound. After Week 12, the risk of spontaneous abortion (miscarriage) decreases exponentially, as most take place before 10 weeks.

Weeks 13-16: the uterus is not too big to fit in the pelvis snugly, so it rises and becomes, technically, an abdominal organ.

The head begins to be covered by fine hair called lanugo; more muscular and bone tissue is developing, active movements and sucking motions with the mouth begin, the liver and pancreas produce secretions, and sex prediction is almost 100% via ultrasound due to the completed development of external genitalia.

Week 20: the fundal height--that is, the level to which the top of the uterus is palpable, is at or near the mother's umbilicus.

Week 21: the covering of the entire fetal body by lanugo is present, along with the appearance of eyebrows, eyelashes, and nails. By this time, the mother (and others) will begin to feel movement, called "quickening."

Week 23: there is completion of the formation of the eyes, alveoli start to form in the lungs, and the fetus has a hand and a startle reflex.

Week 24 ("Viability"): there is accelerating development of the brain and nervous system, the eyelids begin to open and close, and gas exchange in the respiratory system is now possible. (Respiration outside the mother's body, although possible, would require considerable support, as the fetus is still 16 weeks premature. But because respiration can occur at some level at all, Week 24 is called the week of "viability," that is, when the baby has a chance (albeit slim) to survive if born this early and given the support of a Neonatal Intensive Care Unit (NICU).

Week 30: there is an increase of fetal body fat, rhythmic breathing movements occur, thalamic brain connections form, bones are fully developed, and iron, calcium, and phosphorus begin to be stored in association with bone development and maintenance. The lungs are still collapsed, so although breathing movements occur, there is no real pulmonary exchange taking place.

Week 34: when the lanugo begins to disappear, and there is further increase in body fat. By this time, the fingernails have reached the end of the fingertips.

Week 35: there is complete disappearance of lanugo except for on the upper arms and shoulders, fingernails extend beyond the fingertips, small breast buds develop on both sexes, and the hair on the head reaches its fullest and thickest.

Week 40 (281 days) is the center of the bell curve when most women deliver. Of course, there is variation, so anytime between weeks 37 and 41 are considered term in the broader sense.

Week 42 ("post-term," if undelivered): the placenta begins to fail due to increased calcification of its tissue. The fetus is in jeopardy. Fetal movement may slow or cease. Infant mortality begins to rise, statistically.

The above is pregnancy "week-by-week," which is not the way the medical world divides it. For medical purposes, the pregnancy is divided into three trimesters:

A WORD ABOUT FUNDAL HEIGHT

The top of the uterus--the fundus--is not big enough to rise above the pelvis until 12 weeks. It reaches the umbilicus at 20 weeks. After that, a crude measuring technique is to assess an extra week for every inch (or fingerbreadth) above the umbilicus the fundus is palpated. Therefore 24 weeks would be about 4 fingerbreadths above the umbilicus, compatible with the age of viability, which can be important in the field. However, it must always be remembered that without the mother living, the fetus cannot live.

Although you have two patients, if the "incubator" (Mom) doesn't survive, neither will her baby. Therefore, treat the mother first--it's the best way to assure a good outcome for the baby.