Next Unit: The Integumentary System

The REPRODUCTIVE, or GENITOURINARY, system encompasses the internal and external structures required for reproduction. It is closely related to the renal and endocrine systems.

Internal and External Structures of the Male Reproductive System

The male reproductive system consists of the

The major hormone released by the testicles is testosterone, which influences the body to develop the traditionally masculine traits (body hair, dense muscles, and defined bones.) The testicles are temperature sensitive and are kept at a near-ideal temperature by hanging further away from the body when it is warm and retracting closer in cold environments.

The penis itself is composed of specialized venous tissue that can become engorged with blood to both ease the process of intercourse and heighten sensation. 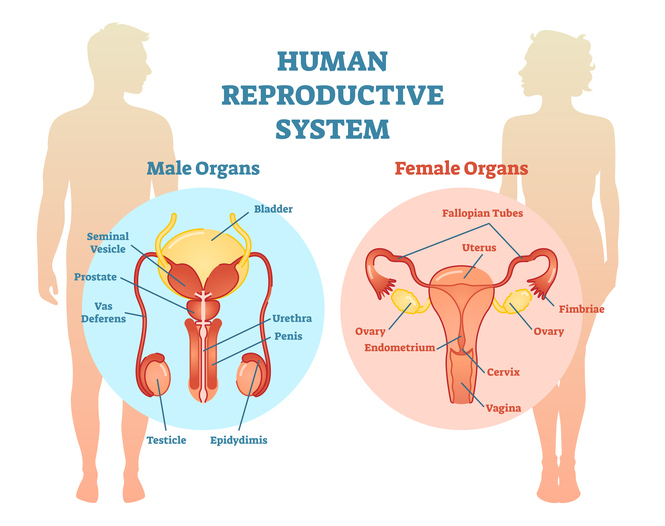 Internal and External Structures of the Female Reproductive System

The female reproductive system is more complex than the male system, given the multiple structures (vagina, cervix, uterus, fallopian tubes, and ovaries) and the cyclic effects upon it by the menstrual cycle.

The key structures in pregnancy are the placenta, umbilical cord, and membranes (amnion/chorion.)

Epididymitis is the inflammation of the epididymis. This is a coiled tube located on the posterior side of each testicle. The inflammation is typically the result of bacteria that has entered into the epididymis that can occur due to a urinary tract infection (UTI) or sexually transmitted infection (STI). The pain will typically begin as mild and progress more as the inflammation increases. It can be excruciating for the patient and treatment is generally oral antibiotics to clear up the infection and analgesics for pain. The age group this affects the most can range from 14-19 years of age in males.

BPH or Benign Prostate Hyperplasia results in rapid enlargement of the prostate, which lies below the bladder and surrounds the urethra. BPH can eventually result in blockage of the urethra leading to urinary retention. This condition usually progresses slowly, resulting in difficulty initiating a stream, leaking urine, and pelvic pain.