THE LUNGS AND PULMONARY CAPILLARIES

Next Unit: Types of Sinuses

The Lungs and Pulmonary Capillaries

This section will delve into the anatomy of the lungs themselves. Including, the layout of the organ, the nature of the microscopic structures that exchange gases, and several of the terms used to define how air moves through the lungs.

Inhaled air is split at the carina into left and right pathways, each of these pathways then subdivides into smaller paths that serve each individual lung lobe. These lobes are filled with countless alveoli and capillaries which exchange gases in the blood for gases in the inhaled air.

The Structure of the Lung 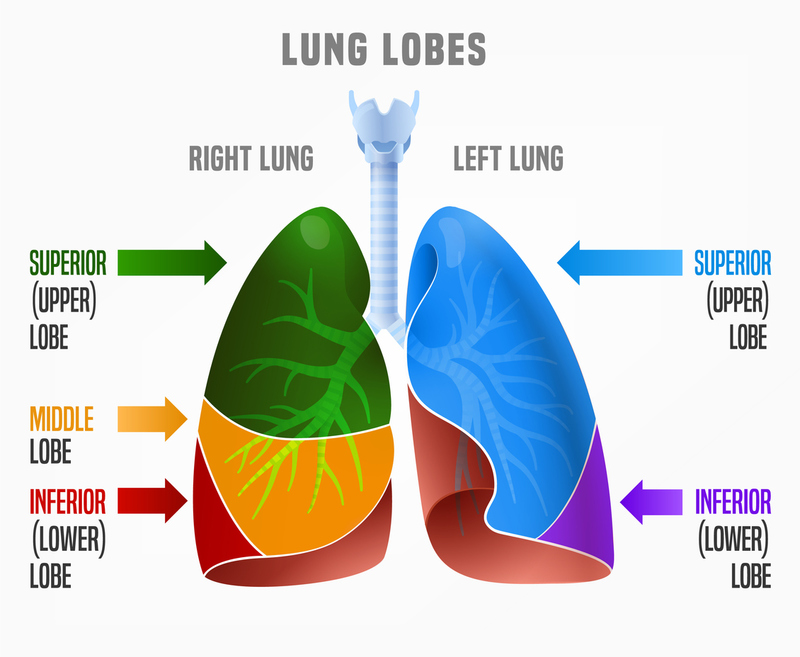 The left lung has an upper and lower lobe

The right lung has an upper, middle, and lower lobe.

Remember that the angle of the right mainstem bronchus encourages inhaled solids/fluids to lodge in the right lung.

Other Structures of the Lung

PLEURA: The lungs are surrounded by delicate membranes named pleura.

Serous fluid lies between the two membranes and allows them to easily slide over each other without friction. This ensures that the lungs can easily inflate and deflate with minimal resistance.

HILUS: Each lung also has a hilus, an indentation in the surface where the blood vessels, bronchi, and nerve fibers enter and exit. The pulmonary hila (plural for hilus) are located on the mediastinal (centermost) surface of each lung.

The now oxygen-rich and carbon dioxide-depleted blood travels from the pulmonary capillaries through the pulmonary veins and into the left atrium of the heart for transit to the left ventricle and the systemic circulation.

SURFACTANT: Alveoli are aided by a thin film called surfactant made up of lipids and proteins which covers their surface and prevents them from collapsing upon exhalation; they reduce the surface tension thus preventing the lungs from sticking together or collapsing. (In very premature babies, the surfactant hasn't yet been produced, causing severe respiratory compromise.) The ability of the lungs to move air is far more complicated than it initially appears. There are many interacting forces that work together to keep the lungs volume closely regulated. Several complex terms and definitions have been included below for completeness. The most important ones to know are tidal volume, minute respiratory volume, and lung compliance.

MINUTE RESPIRATORY VOLUME: (Tidal volume x Respiratory Rate) Defines the volume of air that either enters or exits the lungs per minute.

VITAL CAPACITY: the maximum amount of air that can be moved by the lungs in one breath cycle. i.e. when you breathe out as much as possible, followed by taking the largest breath possible.

RESERVE VOLUME: accounts for physiologic dead space in the lungs. Reserve volume cannot be exhaled. This volume is the amount of air in the lungs after a maximal exhalation. This air reserve keeps the alveoli from collapsing.

LUNG COMPLIANCE: Lung compliance is defined as the ability of the lungs to stretch in response to movement of the diaphragm and chest wall. Low compliance is generally only seen in smokers and patients with severe lung diseases that slowly damage the tissue.