STRUCTURE OF THE CEREBRUM

Next Unit: Function of the Cerebral Lobes

The cerebrum is the largest and most superior portion of the brain, made up of the

The cerebrum is responsible for processing of sensory information and motor control of the body. The majority of the cerebrum is divided into named lobes which will be reviewed in a different section.

CEREBRUM: composed of the two (left and right) cerebral hemispheres and their cortices (singular, cortex--the outermost layer of grey matter), and the underlying regions of white matter.

The fissure that separates the two cerebral hemispheres is known as the longitudinal fissure.

The four lobes of the cortex are bilateral:

The cortex contains many subdivisions and sub-regions that control specific body functions, but as a whole, the cerebrum is responsible for controlling emotions, hearing, vision, personality, movement, and much more. It is a very busy place, consuming 25% of the body's total glucose supply.

CORPUS CALLOSUM: a broad, wide, and flat band of nerve fibers that join the two sides of the brain at 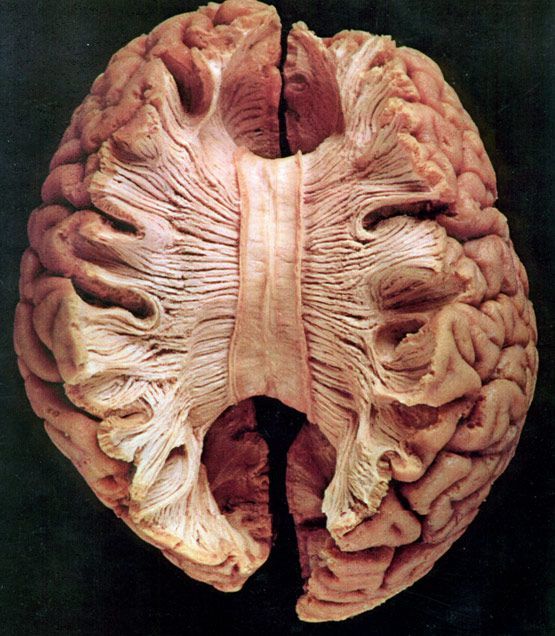 the longitudinal fissure that separates the two hemispheres. It is the largest white matter-based (myelinated axon) structure in the brain. It is responsible for allowing input from opposing hemispheres to each other in order to generate a composite sensorium. (Persons with the destruction of this structure often have their right and left brains prompting opposing actions.)

For your personal curiosity, if so inclined, a great reference for understanding the interrelationships among different brain parts is a book by Norman Doidge, called "The Brain that Changes Itself." (https://www.amazon.com/Brain-That-Changes-Itself-Frontiers-ebook/dp/B000QCTNIW/ref=sr_1_3?ie=UTF8&qid=1542122978&sr=8-3&keywords=norman+doidge). In it, such tales are told like the woman who had no corpus callosum, whose right and left brains both competed to be boss (hint: the right brain is naughty when left to its own devices!).

HIPPOCAMPUS: located in the most inferior sections of the temporal lobes. It is a vital structure for the formation and processing of memories. It is part of the ancient LIMBIC SYSTEM, which also contains the AMYGDALA, OLFACTORY BULBS, ANTERIOR THALAMIC NUCLEI, FORNIX, MAMMILLARY BODY, CINGULATE GYRUS, and LIMBIC MIDBRAIN. 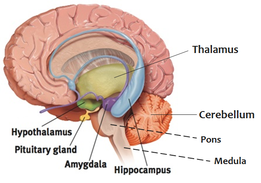 The Limbic System allowed our survival as a species by generating and orchestrating the innate drives, desires, and emotions, ability to remember and learn, and sexual inclinations--crucial features of living and surviving.

VENTRICLES: The ventricles of the brain are a set of four connected cavities where cerebrospinal fluid (CSF) is produced by the choroid plexus, a web of specialized glial cells known as ependymal cells. The ependymal cells line all four ventricles and the central canal of the spinal cord, which is connected to the fourth ventricle. The ventricles allow circulation of CSF in the brain/spine and assist the skull/meninges in protecting the brain. The CSF is absorbed in balance with its production by the arachnoid villi (into the venous circulation and a significant amount probably also drains into lymphatic vessels around the cranial cavity and spinal canal).

The two largest ventricles are the left and right lateral ventricles, located in the cerebrum.