Chronic obstructive pulmonary disease is a major health issue in the US, affecting as many as 1 in 4 Americans; initiating hundreds of thousands of 911 calls, annually. Predisposing factors contributing to the disease include smoking, environmental pollutants, industrial exposure, and other pulmonary infectious processes. The triad of chronic obstructive pulmonary diseases simply called COPD, includes asthma, bronchitis, and emphysema. Even though it is so commonly treated by EMS, there have been misconceptions created over the years concerning the initial treatment of COPD patients in the prehospital environment. Our failure to understand the different disease concepts involved can reduce our ability to identify and treat these patients, safely and effectively. It is important to know COPD inside and out; you will see it often.

Chronic bronchitis is the more common form of COPD. It is characterized by air being trapped within the lungs due to the overproduction of mucus that plugs up the airways.

These changes are dangerous as the air-trapping that COPD leads to reduces oxygen (O2) levels and increases carbon dioxide (CO2) levels in the body. The accumulation of CO2 is the most dangerous as high CO2 levels lead to decreased mental status, decreased respiration, and eventual respiratory failure.

Emphysema is another form of COPD. It leads to the same end result as chronic bronchitis but has a very different etiology.

This process leads to "obstruction" by making it impossible to exhale fast enough to allow fresh air to enter. The body will compensate for this by using the muscles of the ribcage, neck, and back to put pressure on the lungs. Helping them to contract during exhalation and force air out. This results in a dramatic increase in the amount of energy required to breathe. This energy requirement leads to the very skinny and sickly appearance that many patients with emphysema have.

The Reality of COPD

In reality, all patients with COPD have some chronic bronchitis and some emphysema.

Don't underestimate patients with COPD, they will usually have an episode of acute dyspnea manifested at rest, an increase in mucus production, or an increase in the general malaise that accompanies the disease. These patients are already tired so, any worsening dyspnea can cause exhaustion and impending respiratory arrest, quickly! These patients will often give the EMS professional clues at first sight. They are often in severe respiratory distress, found sitting upright in a leaning forward in a tripoding position in an unconscious attempt to increase the ease of respirations. They may also be breathing through pursed lips; the bodies attempt to keep the collapsing alveoli open at the end of respiration. 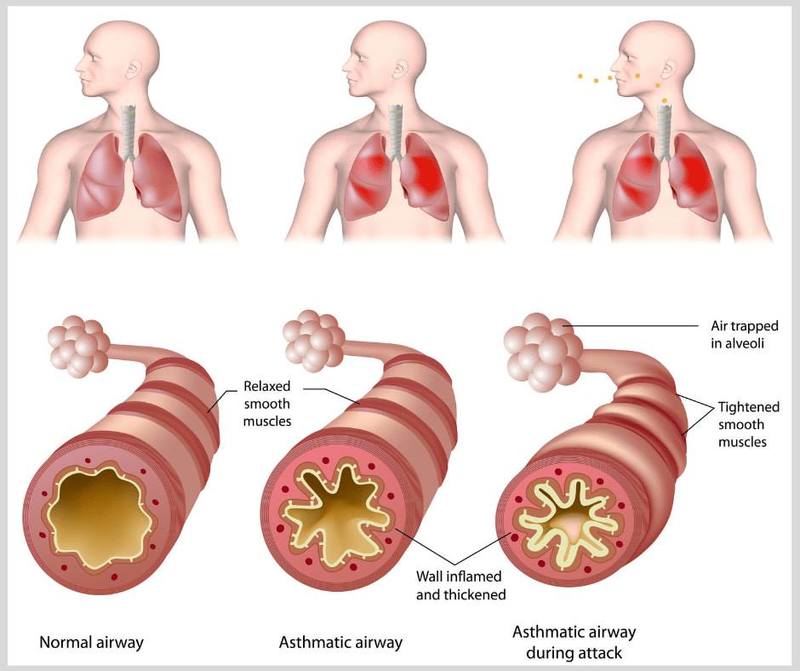 Asthma, also known as "reactive airway disease," is an allergic condition that results in chronic changes in the lungs. It also often results in sudden and severe increases in symptoms that are known as "exacerbations." Asthma is most common in children and many children outgrow this condition early in life. Adults with asthma are typically affected for life in varying degrees of severity.

Asthma attacks are episodes that are defined by sudden obstruction of the airways due to spasms of the smooth muscle that makes up the bronchioles. Increased mucus secretion also occurs which further worsens obstruction. Several other changes also occur.

Most asthma-related deaths occur outside of the hospital. In the prehospital setting, cardiac arrest in patients with severe asthma has been linked to the following factors:

The asthma patient's mental status is a good indicator of their respiratory efficiency. Lethargy, exhaustion, agitation, and confusion are all serious signs of impending respiratory failure. An initial history containing OPQRST/SAMPLE questions is crucial as well as, past episode outcomes (i.e., hospital stays, intubation, CPAP).

On auscultation of the asthmatic lungs, a prolonged expiratory phase may be noted. Wheezing is normally heard from the movement of air through the narrowed airways. Inspiratory wheezing does not indicate upper airway occlusion. It suggests that the large and midsized muscular airways are obstructed, indicating a worse obstruction than if only expiratory wheezes are heard. Inspiratory wheezes also indicate the large airways are filled with mucus. The severity of wheezing does not correlate with the degree of airway obstruction. The absence of wheezing may actually indicate a critical airway obstruction; whereas increased wheezing may indicate a positive response to therapy.

A silent chest (i.e., no wheezes or air movement noted) may indicate a severe obstruction to the point of not being able to auscultate any breath sounds. Other significant signs and symptoms of asthma include:

All patients experiencing shortness of breath will receive oxygen. Much has been said over the years, and much misinformation exists, in reference to hypoxic drive and COPD patients. The axiom "All patients who need oxygen should receive it in the field" remains both accurate and a standard of care.