Premature ventricular complexes (PVC’s) are defined as a cardiac beat where the initiating pacemaker is located in the ventricles instead of the SA node or AV node.

They are caused by

These complexes demonstrate no relationship between the QRS complexes and any previous atrial cardiac activity. P waves are often absent or abnormal, and QRS complexes are wide. PVC’s are often found in a pattern with an otherwise regular rhythm and indicate cardiac irritation.

More than 3 consecutive PVCs is termed a "run."

PVCs are frequently seen in patients with the following:

It is the persistent alteration of normal and premature beats.

TRIGEMINY is the term used for an abnormal beat (PVC) every third beat in a rhythm. (Two normal beats followed by a PVC.)

“R-on-T” PHENOMENON is the superimposition of an ectopic beat on the T wave of a preceding beat and signifies the potential for sending a cardiac rhythm into ventricular fibrillation in those having an MI. There is an electrical impulse that starts at the ascending T wave. This is why cardioversion must be synchronized.

In those having an MI, late couplets were equally likely to initiate ventricular tachycardia.

COUPLETS: Premature ventricular complexes can often be paired consecutively in a rhythm and when this happens, are known as couplets.

MULTIFOCAL PREMATURE VENTRICULAR COMPLEXES are simply premature ventricular complexes with different shapes, indicating that the electrical impulse for each started in a different part of the ventricles. 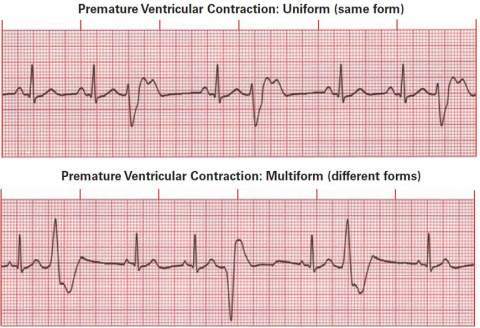 UNIFORMED PREMATURE VENTRICULAR COMPLEXES are simply premature ventricular complexes with the same shape, indicating that the electrical impulse for each started in the same part of the ventricles.

PARASYSTOLE: an independent ectopic ventricular rhythm that competes with the sinus rhythm.

It is the result of an ectopic focus in the ventricles or its conduction system with its own spontaneous automaticity but whose rate is slower than the underlying sinus rate. It isn't suppressed by signals from above, because these are blocked by the refractoriness of the ventricular complexes.

RULE OF BIGEMINY: the “rule of bigeminy” is used to refer to the dependence of bigeminy on the ventricular cycle length in irregular rhythms, meaning that the recurrence of PVC’s depends on the P-P interval--the chances being greater with a longer interval due to a longer time available for a possible re-entrant circuit or automaticity to appear.

Treatment is by use of beta-blockers, possibly calcium-channel blockers, and in severe or recalcitrant cases, ablation of the ectopic pacemaker(s) in the ventricle(s).