Next Unit: Moving Patients On Stairs

On the battlefield, when medics required a device that was easily deployable, strong enough to carry a patient over rough terrain, yet compact enough to be carried in one medic’s gear, the portable stretcher was born. It was foldable, often made of sturdy wood and canvas, and was operated by two people to remove a wounded soldier from the immediate danger of battle to be treated in a warm or cold zone. Explorers developed similar equipment even before this.

When navigating hazardous terrain, such as a car crash down an embankment, the rescue term "low angle" refers to any slope that does not require hands to maintain balance (<40 degrees.)

High angle rescue is considered to be a terrain that has a slope angle of 50 degrees and higher. Rescuers are totally dependent upon the ropes used to keep them and the victims from falling and to gain access to and egress from the rescue location. 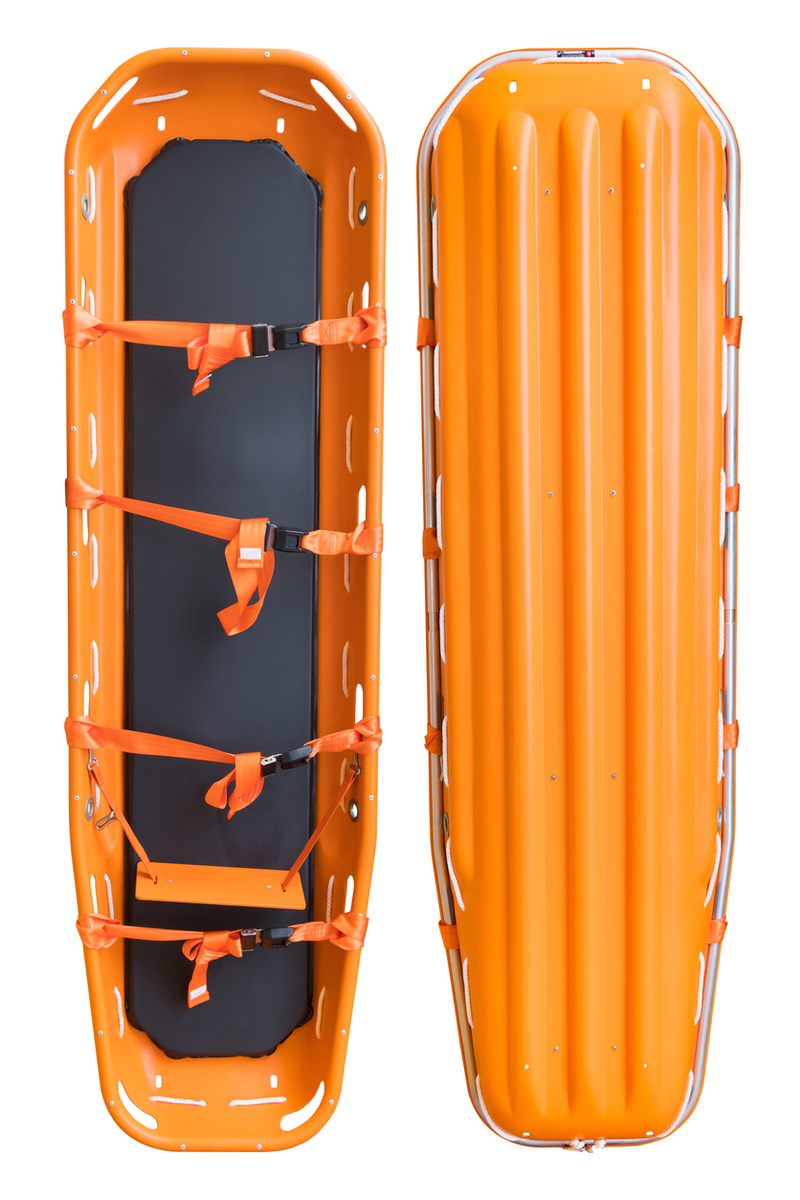 . Modern-day portable stretchers come in many different forms and include any number of stretchers or patient movement devices that can be carried and/or do not rely on wheeled movement.

Flexible stretchers are a type of patient movement device that can be utilized whenever tight quarter conditions are encountered in the field, preventing patients from being extricated by a long spine board or another rigid device.

As with all patient care and patient movement devices in EMS, only professionals that have been trained and are comfortable with the flexible stretcher should be involved in the use of the device.

Flexible stretchers consist of several rigid flat rods embedded into a sheet of sturdy plastic or other material--flat metal pieces seven feet long, about four to six inches apart, secured inside a tarp, combining to form a rollable, sheet-like, rigid but maneuverable device with multiple handles for EMS professionals to grab.

A patient requiring spinal immobilization can be log rolled and this device placed underneath the patient as if the EMS professionals were placing a sheet for a draw sheet move.

IMPLEMENTATION: Movement to the flexible stretcher is performed by

It is recommended that at least four EMS professionals are involved when using the flexible stretcher, and more if movement must be facilitated up or down steep gradients or stairs.

It is important that EMS professionals maintain a handhold as close to the patient as possible to prevent the patient from resting on the ground.

A fifth EMS professional, when practical or needed, will be the spotter of the team and guide the group one step at a time, to the point that the patient can be safely lowered and transferred to a safer and more practical means of patient movements, such as a long spine board.

Another type of patient movement device that is very similar to a long spine board is the scoop stretcher or orthopedic stretcher.

As with all devices in EMS, only professionals that have been trained and are comfortable with the scoop stretcher/orthopedic stretcher should be involved in the use of the device.

The scoop stretcher/orthopedic stretcher consists of two pieces that connect together underneath a patient (who cannot be log rolled due to injury) to form a basket-style carrying device, complete with at least three straps to secure the patient and multiple handles for EMS professionals to carry from along its length.

The inner portion of the scoop stretcher/orthopedic stretcher is shaped like a wedge that contacts the patient first, allowing both sides of the device to be pushed together, and this action alone positions the device correctly behind the patient.

The scoop stretcher has the same ability as the long spine board and can be used for immobilization, and has the same types of straps to secure the patient.

If the patient requires spinal immobilization,

Some patients are much larger and heavier than the main population and require specialized equipment to facilitate safe movement and transport. Bariatric stretchers are utilized when the patient is expected to be well over or close to the weight limit or size constraints of conventional stretchers.

Most bariatric stretchers are wheeled stretcher devices, consisting of a metal frame that is weight-approved for approximately 1,000 pounds, includes a patient mattress, and several straps to secure the patient to the device (at minimum, a legs strap, a waist or abdomen strap, and chest strap, often with vertical shoulder harnesses) and may come equipped with an IV stand, storage area on the back (for oxygen, sheets, etc.) and usually allows for the patient to be placed in multiple different positions:

The bariatric stretchers can be lowered to preset heights allowing able patients to walk unassisted to the device and also allowing EMS professionals to use the draw sheet method to pull a patient over to the device from a bed.

Most bariatric stretchers also have additional extendable handrails, found midway between the front and back of the stretcher, that allow for better control during movement by multiple EMS providers

Bariatric stretchers have the same loading styles as other modern-day stretchers and can come with several other tools such as winch systems or elevator systems to facilitate loading into the ambulance.

WINCH systems allow for the patient and stretcher to be pulled into the back of the ambulance by a mechanical steel wire and motor, allowing for much more control and preventing injuries to EMS professionals.

ELEVATOR systems extend from the back of the ambulance and lower to the ground, allowing a bariatric stretcher and patient to be secured on a platform which is then lifted to the height of the ambulance box for securement inside the unit prior to transport.

Bariatric stretchers are much heavier than other devices and require adequate personnel to use safely.