For the purposes of the national registry exam, understanding the positioning of major bones, muscles, and ligaments is key.

Only a basic understanding of the visceral organs in the area is necessary. 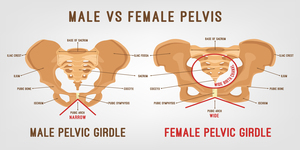 The girdle is made up of the fused sacral vertebra and two INNOMINATE (aka "hip") bones. The innominate bones are divided into several major anatomical areas which act as the attachment points for major muscles.

Knowing the exact muscles of the leg is not important, but knowing how they apply force to the pubic girdle is vital. A basic understanding will allow you to better appreciate the danger of ambulation and muscle spasm in the setting of injury.

LIGAMENTS: There are two major groups of ligaments that provide nearly all the structure of the pelvis.

PUBIC SYMPHYSIS: vital to the stability of the pelvis. It is a dense collection of tissue that bolts the pubic "anterior" section of the hip bones together.

ANTERIOR: The iliac and femoral vessels run anterior to the bones of the pelvis, making them most apt to injury in trauma to the tissue or bones of the anterior pelvis. The external iliac arteries branch into the femoral arteries and others, making the iliac vessels in harm's way higher up the iliac crest and the femoral vessels endangered below this. (The femoral artery branches from the external iliac artery about where the flexion of the leg is with the hip.)

Because the aorta is basically a midline structure (the vena cava also, but slightly to the right of midline), the more medial the pelvic trauma, the more likely hitting these; the more lateral, the less likely.

POSTERIOR: The sacral venous plexus is one of the most commonly injured elements in the pelvis during any posterior fracture. The venous plexus is particularly vulnerable given its large size and close association with breakable bones. It is the site of significant bleeding since it is an "intersection" of numerous collateral venous flows from the other venous plexi (of the rectum, bladder, and genitourinary areas), all meeting in the sacroiliac and sacral areas. 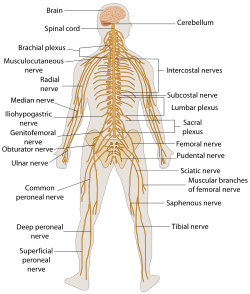 Major nerve pathways exist throughout the pelvis, both anterior, medial, and posterior to the ilium, with the sciatic nerve running just above the ischial ramus.

The major organs in the pelvic area are

Each of these can be damaged by fractures of blunt trauma in this region. [This will be reviewed further in the PATHOPHYSIOLOGY OF PELVIC FRACTURE section]

NOTEWORTHY: Chest injuries, by far, have the strongest association with pelvic fracture. Injuries to the chest wall are extremely common in high energy mechanisms of injury. The bladder and Intestines lie within the pelvic cavity and are commonly injured, but not as often as the anterior chest!