ORGANS OF THE ABDOMINOPELVIC CAVITY

The Abdominal Cavity and its Subdivisions 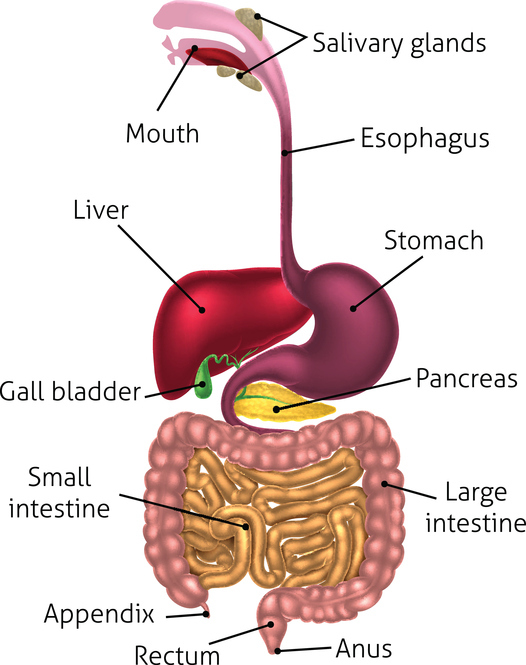 STOMACH: Pear-shaped organ where most of the digestion occurs. The stomach acts as a receptacle lying between the esophagus and the small intestine. Emergencies due to the stomach are usually upper GI bleeding from ulcer, alcoholism, or malignancy. Pain is primarily in the mid-to-upper abdomen, crossing the midline slightly.

Emergencies due to the small and large colon include

ESOPHAGUS: the muscular tube that connects the pharynx to the stomach. It runs vertically (in the vertical plane) between the trachea and the spine. Emergencies that involve the esophagus are usually due to upper GI bleeding from esophageal varices caused by alcoholism.

"Globus hystericus" is an unfortunately named condition in which a person feels like there is a mass in the throat/esophagus which isn't really there. Far from the suffering being hysterical, it happens for no reason but can also be due to a scratched throat or spasm.

SPLEEN: The spleen is a blood filter that removes old blood cells. It also holds its own reserve of red blood cells and platelets which it can release in emergencies. It is an immunological organ responsible for the production of different types of immune cells and exposing those immune cells to bacteria in the blood, ensuring timely removal of these pathogens. Emergencies involving the spleen are usually involving rupture from trauma, with severe LUQ and left shoulder blade pain.

KIDNEYS: The kidneys are the two bean-shaped organs found on each side of the body which filters the blood for waste products. Kidneys also help regulate fluid balance and play a role in blood pressure in the body. Emergencies include obstruction due to stone (nephrolithiasis) or infection (pyelonephritis).

URETERS: Running under the peritoneum ("retroperitoneal"), these tubes run urine from the kidneys to the urinary bladder.

URINARY BLADDER: The urinary bladder is a hollow, muscular organ that holds urine while it is waiting to be eliminated. Most bladder emergencies involve obstruction, urinary retention, or infection ("cystitis").

LIVER: The liver is the body's largest solid organ and is located in the upper right quadrant of the abdomen under the diaphragm. The liver helps keep the body detoxified, regulates glycogen storage, and secretes bile to help in digestion. Its capsule can swell with congestive heart failure or infection, causing severe RUQ pain, vomiting, and referred pain to the right shoulder blade.

GALLBLADDER: The gallbladder is a small hollow sac that lies directly under the liver where liver-produced bile is stored then put back into the system via the bile duct that empties into the duodenum. It is what gives stool its brown color. Emergencies of the gallbladder include stone obstruction (cholelithiasis) and infection (cholecystitis).

PANCREAS: The pancreas is a glandular (endocrine) organ that sits behind the stomach and secretes insulin and glucagon, but also serves as an exocrine organ to produce other enzymes that assist in digestion and the absorption of nutrients. Its exocrine duct empties into the duodenum. Emergencies of the pancreas are pancreatitis (a serious inflammation/infection due to alcoholism) and malignancy, which is "silent" until it reaches the head of the pancreas where obstruction of the pancreatic and bile ducts finally causes symptoms. Pain from pancreatitis is felt in the back, mimicking kidney infection. The embedded "islet cells," (aka, the "Isles of Langerhans"); Alpha cells are what produce glucagon; its ß cells produce insulin.

The abdominal regions, from right to left and superior to inferior, are as follows:

The Four Quadrants of the Abdomen

Most abdominal pain is identified by the quadrant of the abdomen where it occurs. If one were to draw an X-axis and a Y-axis across the abdomen, with the umbilicus at the 0,0 coordinates--four quadrants would be established in the right and left and the upper and lower areas.

The following quadrants are used when describing abdominal pain:

The entire abdomen is covered by a shell of very thin tissue called the peritoneum. Not only does it form the roof, sides, and floor or the abdominal cavity (the "peritoneal" cavity), but it also turns at each of the abdominal organs to cover them. Some organs lie under it ("retroperitoneal"), such as the kidneys, ureters, bladder, blood vessels, and lymphatics; others are wrapped with it, anteriorly and posteriorly, as with the intestines and stomach (and in women, the reproductive organs).