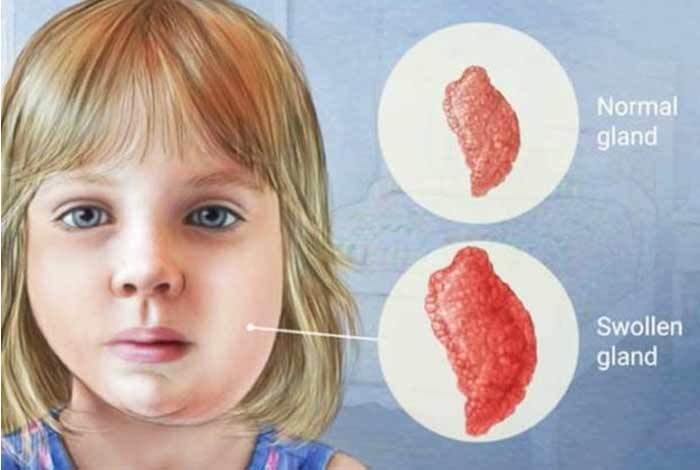 Mumps is a contagious and infectious viral disease causing swelling of the parotid and other salivary glands in the face and possible involvement of the male and female reproductive organs (see below).

It usually appears in the populations in late winter/early spring, typically among school-aged children and college-aged young adults. Infants less than one year are still protected by maternal antibodies, so it is rare in this group. It is preventable with immunization, and since immunization began in 1967, there has been a > 99% decrease in mumps in the USA.

Mortality rate: about one per ten thousand people who are infected die.

TRANSMISSION: Mumps is spread person-to-person through contact with respiratory secretions, such as saliva from an infected person. Mumps can also be spread through direct contact with the virus by sharing with the infected person's utensils or cups or through indirect surface contact after the surface has been exposed.

INFECTIOUS PERIOD: A person with mumps is contagious from approximately seven days before symptoms start until about eight days after the start of symptoms. 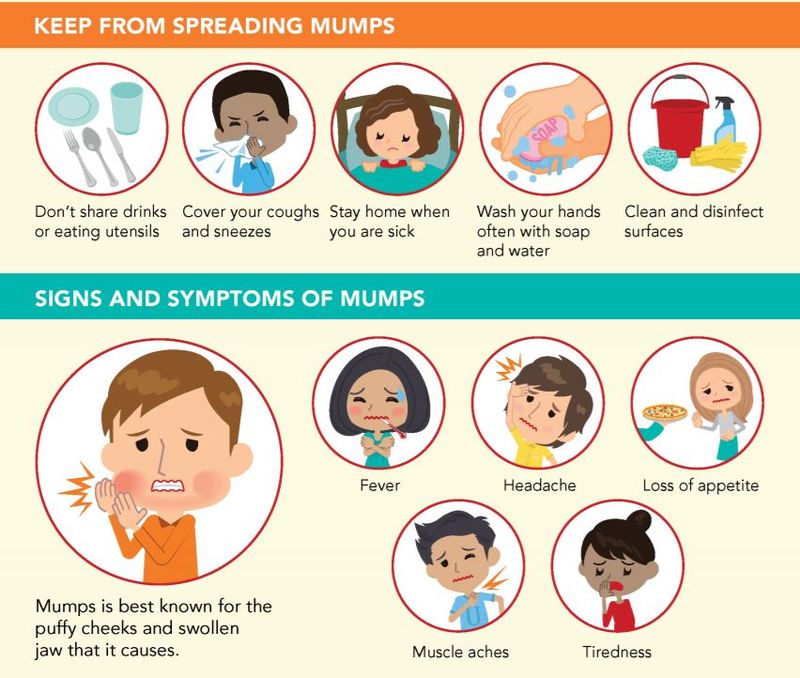 Mumps begins with a few days of

The parotid is most commonly involved in children ages 2-9 years. There may also be an associated earache. Parotid swelling can last up to 10 days.

Most people recover completely within a few weeks, as mumps is usually self-limited.

ORCHITIS: Epididymo-orchitis--inflammation of the testicle(s)/epididymis--is the most common complication in males (in 15-30% of mumps).

There is severe testicular pain and swelling of the scrotum. It can be unilateral (majority) or bilateral. The major complication of mumps orchitis is testicular atrophy, but infertility is actually rare.

OOPHORITIS: This is ovarian involvement in 5% of postpubertal females with mumps. It presents with lower abdominal pain, fever, and vomiting.

Diagnosis is usually via a

The Immunoglobulins (Ig) antibodies are a measure of the host's response to infection. Typically, as seen in mumps, the IgM antibody is the first to rise but fades after the IgG (permanent antibodies) rise and stay.

It is the IgG that provides the "permanent protection," although this can fade over time. Other Ig antibodies can be involved, but it is the timeline relationship between IgM/IgG that can determine acute infection vs. convalescence and lasting immunity.

The best prevention strategy remains immunization. Control of mumps transmission is difficult because the virus is in saliva days before clinical symptoms of parotitis occur. Also, viral shedding can occur in those 20-40% of infected people who have no symptoms.

Most recommend a series of 3 MMR immunizations for the best protection.

There is no specific antiviral therapy for the treatment of mumps.

MANAGEMENT consists of supportive care and may include use of an analgesic/antipyretic agent such as acetaminophen. Parotid discomfort may be managed by application of warm or cold packs. Orchitis may be managed with nonsteroidal anti-inflammatory agents (NSAIDs), support of the inflamed testis, and cold packs.

In the field, general management for a patient with mumps is supportive and includes