The Major Players in the LUQ 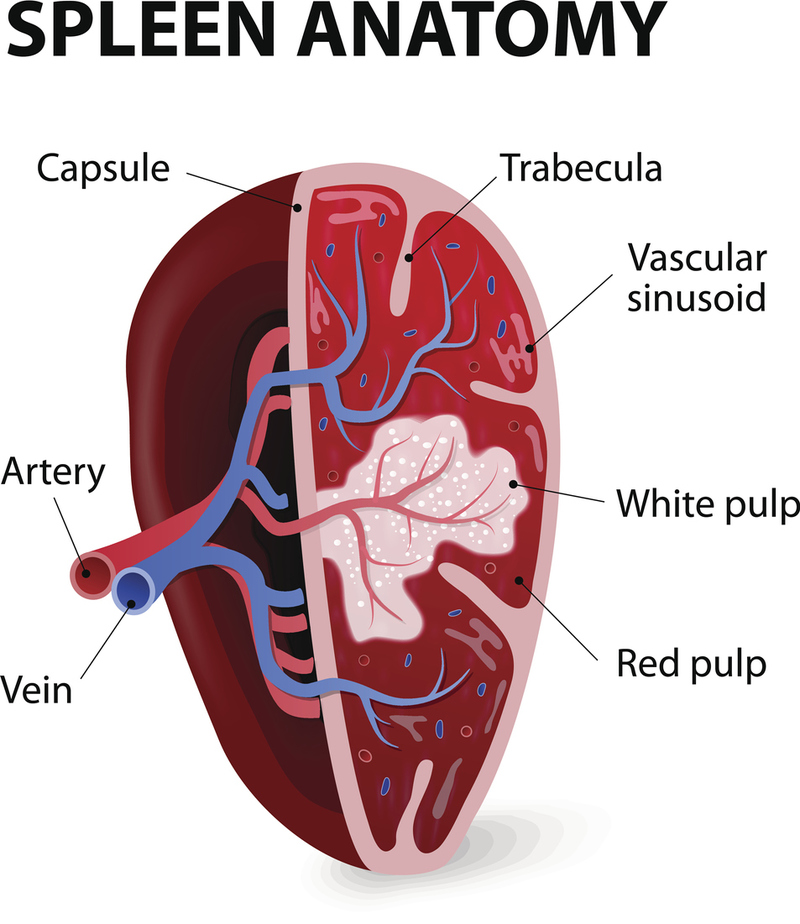 The spleen is the most frequent organ suspected in LUQ pain for reasons not the least of which being that a missed ruptured spleen will cause death. It is the most commonly injured abdominal organ in pediatric trauma.

Being protected by its position under the left lower rib cage may be a double-edged sword because a fractured rib can easily produce a shard to injure it. It is a particularly delicate organ, easily damaged by a direct blow, as in a fall onto a blunt object.

Part of the immune system, the spleen is a blood filter where old red blood cells are recycled. It is also a storage depot for red and white blood cells and platelets. When it enlarges or is damaged, pain can be severe, because its capsule is very sensitive.

REFERRAL PATTERN OF PAIN DUE TO THE SPLEEN: direct pain from the spleen is in the LUQ, often radiating to the left shoulder as referred pain ("Kehr sign"), and irritation due to a condition of the spleen also can involve the left hemidiaphragm above it. Appetite can be affected (early feeling of fullness) due to its closeness to the stomach, although this is a subtlety lost amidst the main presentation of severe pain.

SPLENOMEGALY: means enlargement of the spleen. It can enlarge for a number of reasons, including blood disorders, viral illnesses (such as mononucleosis), bacterial infection (splenic abscess), or traumatic bleeding (hematoma).

Enlargement from bleeding related to trauma (with rupture and internal bleeding) requires surgery to remove it. Falls, auto accidents, and assault are the most common causes of splenic rupture emergencies.

SPENIC INFARCTION: An infarct from embolism to the spleen due to atrial fibrillation will classically present with severe left upper quadrant pain.

The stomach is traditionally considered to lie "primarily" toward the left, but it crosses a little over to the midline. It ends at a sphincter (pyloric) which allows partially digested food to enter the first part of the small intestines, the duodenum. 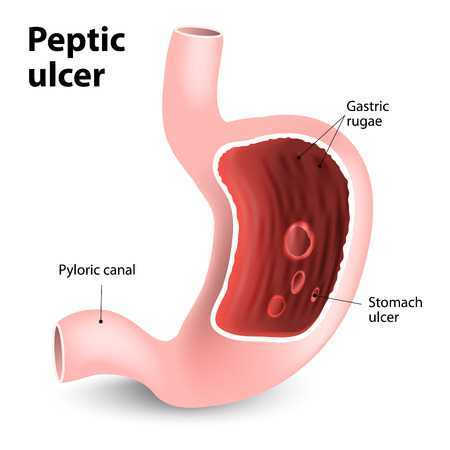 PEPTIC ULCER DISEASE: any defect (usually, an erosion) of the inside lining of the stomach or duodenum is referred to as peptic ulcer disease (PUD). PUD may have no symptoms, but it can also present with gastritis and other complaints or even life-threatening hemorrhage (and everything in between).

PUD can be caused by: 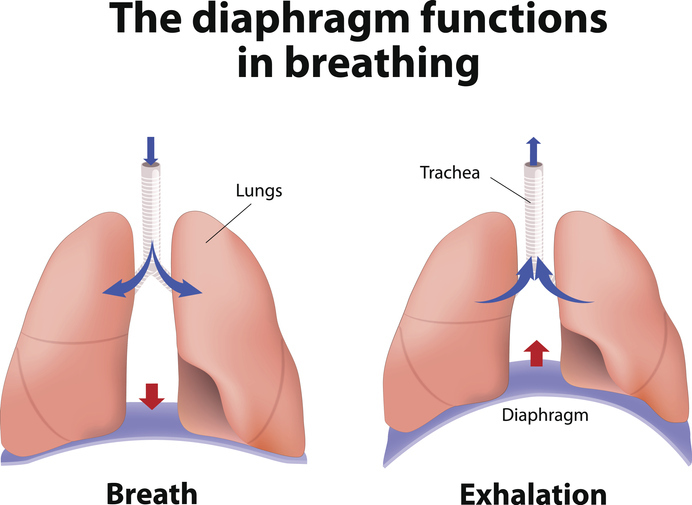 The diaphragm is the horizontal oblong muscle that divides the abdomen below from the chest above. As such, it acts as "the roof" over the abdominal cavity and "the floor" of the chest (thoracic) cavity. When its contraction causes it to pull down, it sets up a negative pressure in the lungs above which then are forced to expand, drawing in air.

Problems with the diaphragm include:

DIAPHRAGMATIC (HIATAL) HERNIA: the esophagus passes through the diaphragm and the hole that allows this can widen, a hernia which traps a portion of the upper stomach which then cannot drain acid effectively, causing gastroesophageal reflux disease (GERD). This can cause the esophagus to burn and erode, with associated symptoms of burning in the mid-chest. Sitting up may relieve it, as the stomach can slide back down to where it normally should be.

Severe erosion can cause severe bleeding and hematemesis, especially with the esophageal varices seen in alcoholism.

DIAPHRAGM MUSCLE STRAIN: this can occur with sneezing, shouting, or strained inhaling (e.g., scuba or gas masks). Depending on the side—left or right, referred pain to the left or right shoulder blade can be present. It can be very sharp and incapacitating. Treatment is with NSAIDs.

LEFT DIAPHRAGM IRRITATION: from blood can be seen with splenic rupture and bleeding.

SUBDIAPHRAGMATIC ABSCESS: usually a serious infection from another infectious process in the bowel or spleen, requiring IV antibiotics and/or surgery.

The pancreas is a horizontally positioned organ along the mid-abdomen. EMS calls can be due to:

Pancreatic abscesses, cysts, or generalized pancreatitis from alcoholism can cause severe pain, usually worse after eating, when digestive juices are stimulated. Untreated, pancreatitis can lead to pseudocyst, bile duct or duodenal obstruction, or even fluid in the abdomen (ascites).

PANCREATIC CANCER: often has no symptoms when it begins in the left side of the pancreas (the "tail"). Called a “silent killer,” it isn’t until it reaches the head of the pancreas [SEE RUQ UNIT) that it blocks the ducts to the duodenum to produce pain. By then, the expected survival rate has plunged due to advanced disease. 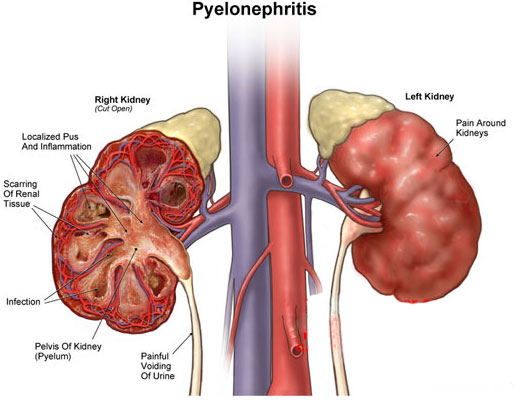 The left kidney can get infected (pyelonephritis) or obstructed with a stone (nephrolithiasis). Pain in the left kidney can be exquisitely painful with just a tap on the back over the kidney (equally true with the right kidney).

PYELONEPHRITIS:  infection is accompanied by high fevers and can quickly cause life-threatening sepsis, hemolysis (anemia), and subsequent scarring with kidney failure. It is a medical emergency treated with strong intravenous antibiotics.

OBSTRUCTION: a blockage, usually because of a stone, can cause urine to back up into the kidney. Stones are addressed with removal by small, endoscopic retrieval, lithotripsy (pulverization with sound), or if necessary, surgery.

Hydration is encouraged to “flood the stone” down the line where it can be urinated out. Thereafter, a dietary assessment may be indicated, based on the type of stone that was formed via crystallization of a particular solute, such as calcium, oxalate, or citrate.

The stone can obstruct within the kidney or down into the ureter. Pain with ureter obstruction is typically in the flank and the lower the stone is wedged, the lower the flank pain.

IN THE FIELD: the important thing for the EMS responder to know is that both nephrolithiasis and pyelonephritis are similarly painful and are mandatory transport situations, although just the pain management necessary will make this obvious to you.

Rarely is the large bowel a cause of LUQ pain.

DIVERTICULOSIS: a weakness in the bowel wall causing a sac-like protrusion (diverticulum) can cause infection (diverticulitis) and pain, usually radiating down toward the LLQ, and it is the LLQ that is the most frequent complaint of pain from diverticulitis--NOT LUQ PAIN, although that is possible. If hard fecal pieces (fecoliths) cause blockage, a diverticulum can rupture. 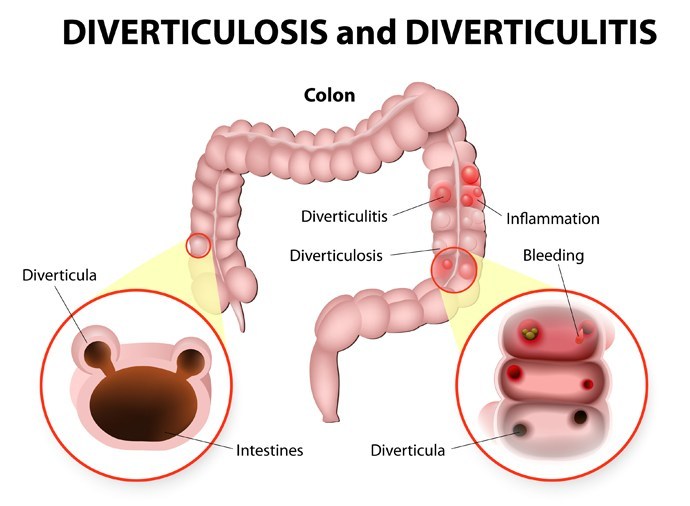 The small bowel usually minds its own business (digesting and passing food onward toward the large bowel). However, infections and adhesions of the abdomen or cancer can cause obstructions, and the LUQ is no exception because the small intestines, all twenty feet of it, can be displaced upward into this quadrant from bloating or gas. Otherwise, it is the duodenum that is most frequently involved in small bowel-related LUQ pain.

ADHESIONS: abnormal connections between tissues in the abdomen. Adhesions, although not common in the LUQ, can occur anywhere in the abdomen (including the LUQ).

The abdomen is very vigilant to infection and inflammation, stimulating bowel and bowel fat to migrate toward such an area to wall it off from the rest of the body. When it heals, unfortunately, the two areas are stuck together, sometimes creating a kink in the bowel that can make passage of bowel contents difficult. Moving feces can then distend the bowel at the kink to create colicky, sharp pain that is usually short-lived; however, adhesions can be so restricting such that they can cause a complete obstruction that is a surgical emergency.

The most common cause of adhesions in the LUQ is prior to spleen surgery (splenectomy).

IN THE FIELD: except for the spleen, the LUQ usually isn’t a frequent flier in the EMS responder's day. But the spleen makes up for it in a big way because of the likelihood of death when a rupture goes undiagnosed or unaddressed for too long.