Chest trauma can result in several injuries that may be fatal to a patient if they are not stabilized prior to transport. These injuries can be roughly divided into open and closed chest injuries, based on whether or not the chest cavity is exposed to the surrounding atmosphere. This section will discuss how these injuries relate to the ABC's and various life threats.

SECONDARY PUNCTURE INJURY: Fragments or sharp ends of fractured ribs can lead to the puncture and bleeding of organs within the chest and abdomen. Due to their proximity to the ribs, most common organs involved are the lungs, liver, and spleen.

For all forms of internal injury secondary to a rib fracture, surgery is necessary, making transport to a trauma center an urgent necessity. Patients suspected of having internal bleeding should be frequently re-assessed to determine if they require IV fluids or blood products.

FLAIL CHEST: A flail chest can occur when two or more ribs are broken in two or more places.  Creating a floating island of chest wall with no bony support that moves at a different rhythm from the rest of the chest. This "flail segment" causes extreme pain, as the broken ends of the fractured ribs rub with each breath. When multiple adjoining ribs fracture, the chest wall can fully lose rigidity. This results in a larger flail segment that moves with the lungs as opposed to staying stationary and allowing proper lung expansion/contraction. This is termed "paradoxical movement."

Paradoxical movement of the chest results in significantly reduced ventilation, this leads to the symptoms of shortness of breath, difficulty breathing, and extreme pain. If untreated with positive pressure oxygen and rapid surgery this will lead to low oxygen saturation and potential organ damage resulting from hypoxia.

STERNAL FRACTURE: Rarely dangerous on its own, a fracture of the sternum commonly presents secondary to high energy trauma which damages the underlying lung/heart/vessels. This can lead to airway, breathing, or circulatory compromise depending on which underlying structures are damaged.

The most commonly injured organs in sternal fracture are the lungs; followed closely by the heart, spine, esophagus, trachea. and large blood vessels within the chest.

COMMOTIO CORDIS: An induced arrhythmia in the heart secondary to blunt force impact at specific times in the cardiac cycle.

This condition is more common in children and adolescents due to the greater flexibility of the sternum and ribs allowing for more impact force to reach the heart. Even minor impacts can induce commotio cordis, meaning that obvious bruising, fractures, or other injuries may not be present. The history of a sudden collapse followed by instant unconsciousness and loss of pulse following an impact to the chest is the classic story of commotio cordis.

The loss of consciousness is due to compromised circulation due to cardiac arrhythmia. Patients with commotio cordis require CPR prior to EMS arrival and eventual defibrillation to survive. While the best results are obtained by following ACLS algorithms, the use of an AED will also prove beneficial.

OTHER CLOSED CHEST INJURIES: There are many other closed chest injuries that do not require special treatment in the EMS setting, supporting the ABC's and arranging rapid transport are generally sufficient for these complications of trauma.

According to Emerg Med J. 2009 Oct;26(10):738-40, "Chest decompression in traumatic cardiac arrest identifies and treats a high proportion of potentially life-ending injuries and should be considered as part of the resuscitation effort of patients in traumatic cardiac arrest. In a proportion of patients, non-survivable injuries are identified which guide resuscitation efforts." 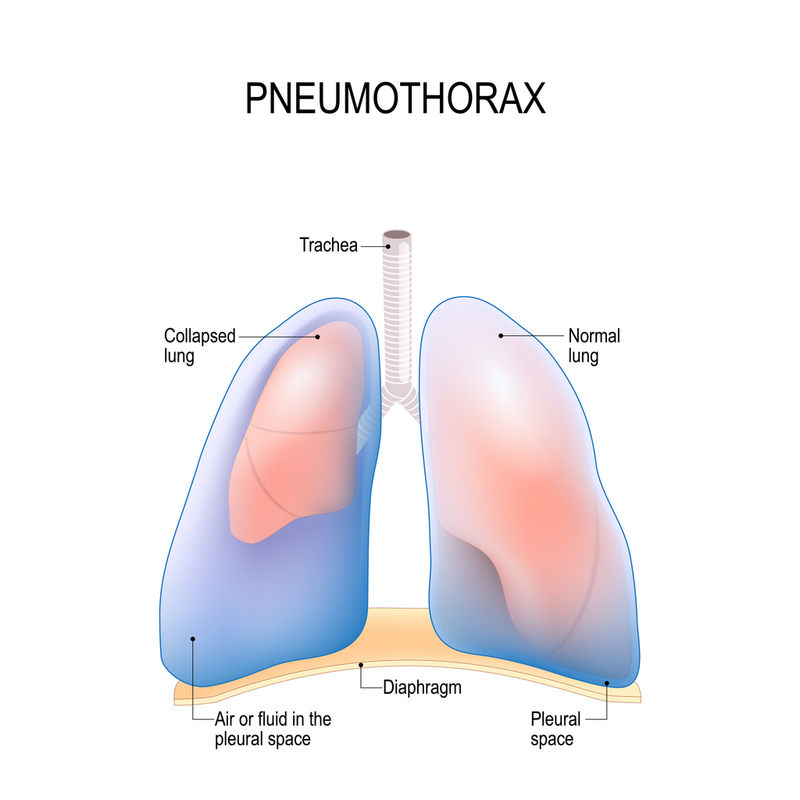 PNEUMOTHORAX: a collection of air in the chest cavity due to rupture of an internal lung structure. While not open to the outside of the chest wall, often considered an open injury as they result from trauma to the inner lung opening the chest cavity to the atmosphere through the bronchi/trachea.

A pneumothorax can occur due to trauma causing the bronchi to tear or small collections of alveoli (blebs) to rupture, spilling air into the chest. If this air pocket expands far enough it can prevent lung expansion by replacing the space the lung occupies in the chest with air. In extreme cases, each of the patient's breaths will draw more air into the chest, raising the pressure within the chest, resulting in a tension pneumothorax.

The signs and symptoms of a pneumothorax only become apparent when the lung is collapsed enough to limit oxygen exchange, the timeline over which this occurs is different for each patient. Younger and healthier patients generally take much longer to begin showing symptoms. Gradually increasing shortness of breath, lightheadedness, and altered state of consciousness are the most common symptoms of pneumothorax. A decrease in breath sounds over the affected lung is the earliest exam finding and a decrease in oxygenation is the typical late exam finding.

OPEN PNEUMOTHORAX: An open pneumothorax is one that results from an external wound allowing air into the chest cavity as opposed to the internal rupture of air-containing structures. Often called "sucking chest wounds" due to the gurgling sounds that are made when blood from the wound mixes with air that is being sucked into the chest cavity while breathing.

Open pneumothoraxes are managed with specific dressings commonly called; three-way dressings, occlusive dressings, or chest seals. These prevent additional air from entering the wound upon inspiration, while still allowing air already in the chest cavity to naturally exit the wound as the patient moves and breathes.

Besides the placement of a chest seal and monitoring bleeding, the management of an open pneumothorax is the same as a closed pneumothorax (oxygen, monitors, and frequent reassessment). Note that there is an elevated risk of these wounds converting to tension pneumothorax, be quick to perform a needle decompression in these patients if they deteriorate during transport.

HEMOTHORAX: Similar in effect to a pneumothorax, a hemothorax is the filling of the chest cavity with blood, which displaces the room the lung uses to expand. Decreasing the amount of air that can enter the lung tissue and exchange oxygen with the blood. It is important to remember that "hemothorax" refers specifically to the blood outside of the lung tissue. "pulmonary hemorrhage" refers to blood within the lung itself, both of these are often present together.

The management of hemothorax is largely identical to pneumothorax, with oxygenation and ventilation being the primary concerns for the patient. The major difference is the significant risk of hemorrhagic shock resulting from the loss of significant blood volume into the chest cavity, it is possible to lose enough blood volume internally in the chest cavity to cause death. Watch closely for the early signs of blood loss (headache, tachycardia, tachypnea) and be ready to provide circulatory support.

CARDIAC TAMPONADE: The filling of the space between the pericardium and the heart with blood or other fluid. Similar to a hemothorax, the filling of this normally empty space results in decreased space for the heart to expand and fill with blood between beats. The smaller size of the heart compared to the lungs means that a very small amount of fluid can lead to fatal hypotension secondary to reduced cardiac output.

Tamponade can occur in trauma (due to hemopericardium) but is more often the result of medical problems, kidney failure, liver failure, and cancer can all lead to fluid filling this space (known as pericardial effusion). The telltale symptoms of tamponade are known as "becks triad;" Hypotension, distant heart sounds, and distention of the neck veins. Management is based around providing 100% oxygen to maximize the effect of the little blood that the heart is still able to pump while transporting the patient to a trauma center for urgent surgery.

In some jurisdictions, Paramedics or AEMT's can perform lifesaving "pericardiocentesis" (a needle-drainage of the pericardium). This procedure requires specific training and permission from medical command.