Next Unit: Heart Failure For the EMT Provider

Normal heart sounds are the cardiac valves closing--the homeostatic heart heartbeat are auscultated (heard through a stethoscope) over:

The Lub-: This is called the "First Heart Sound," and for this reason it is designated S1. 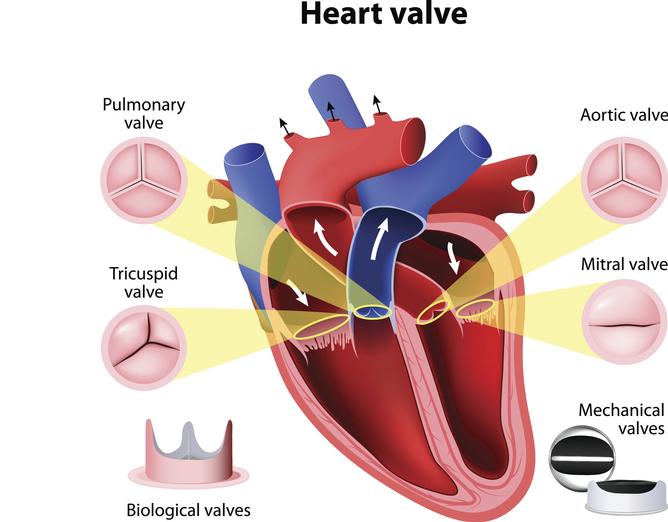 It represents the nearly simultaneous closure of the left and right atrioventricular valves--that is, the mitral and tricuspid valves, respectively, and is created from reverberation within the blood as an effect of the sudden block of blood flow by the valves.. Since it occurs first, it represents the beginning of atrial diastole and the initiation of ventricular systole.

S1 is composed of mitral valve closure and tricuspid valve closure, known as M1 and T1, and takes place at the beginning of ventricular contraction (systole).

Normally, M1 occurs slightly before T1, but in certain cases the order can be reversed, as often found in a left bundle branch block.

Upon ventricular contraction, the pressure from the ventricles contracting cause papillary muscles in each ventricle that are attached to the cusps of the tricuspid and mitral valves via chordae tendineae (heart strings) to become tense and prevent the backflow of blood.

The -Dub: This is called the "Second Heart Sound," and for this reason it is designated S2. It represents the closure of the pulmonary and aortic valves, and is created from reverberation within the blood as an effect of the sudden block of flow reversal.

(These two components (P2 and A2) separate a bit on inspiration, but a wide split indicates a conduction-type arrhythmia or hemodynamic causes.)

A physiological split of S2 normally occurs during inhalation due to increases in time needed for pulmonary pressure to exceed that of the right ventricular pressure, because inhalation causes a decrease in intrathoracic pressure.

S3 and S4 are low-frequency diastolic sounds that originate in the ventricles.

S3 occurs at the beginning of diastole after S2, is lower in pitch than S1 or S2, is not of valvular origin, and is thought to be caused by the oscillation of blood back and forth between the walls of the ventricles initiated by blood rushing in from the atria. As such, it is associated with with an enlarged ventricular chamber.

It may also be caused by tensing of the chordae tendineae during rapid filling and expansion of the ventricle. The S3 sound is indicative of increased volume of blood within the ventricle.

An S3 is able to be distinguished as either left- or right-sided by whether or not it increases in intensity with inhalation or exhalation.

S3 is also known as a protodiastolic gallop.

S4 occurs just after atrial contraction at the end of diastole and immediately before S1, and is caused by the result of blood being forced into a stiff or hypertrophic ventricle. Atrial contraction must be present for S4 to be produced, and the sound is indicative of a pathologic state such as a failing or hypertrophic left ventricle as is found in systemic hypertension, severe valvular aortic stenosis, and hypertrophic cardiomyopathy.

COR PULONALE: Such cardiac repercussion can originate from pulmonary hypertension, called COR PULMONALE (trans., heart disease by way of the lungs). In fact, the 4-toned "Ta-Lub-Dub-Ta" is a sign of cor pulmonale.

S3 is the ventricular gallop and S4 is the atrial gallop sound.

Murmurs: These are extra sounds heard different from the S1 and S2 and can be described in relation to both heart sounds. They are the result of turbulence of flow of blood within the heart chambers and are useful in diagnosing valvular diseases that create them. (Turbulence of flow within arteries are called bruits--pronounced "BRU'-eez.")