Next Unit: The Venous System

Blood vessels function to transport blood. Generally, they distribute oxygen-rich blood to the tissues via arteries and their branches and collect de-oxygenated blood via the venous (vein) system of veins, called tributaries, not branches.

Confluence, like in bodies of water, is the meeting together of tributaries. Divergence, like from the trunk of a tree, is a branching out. Therefore, arteries create branches and veins are created from tributaries.

If you put your thumb over the spout of a garden hose, occluding it, the continued water flow will build up the pressure within the hose. If that same amount of water were in a hose that had a larger diameter, the pressure would be lower than the pressure of that water in a thinner hose. Likewise, the diameter of a vessel influences the pressure of the blood within it.

Hydrostatic Pressure: the pressure that blood exerts against the walls of the vessel.

Oncotic Pressure: the force that tends to pull water into the circulatory system and prevents it from leaving.

These two forces are opposing and interact to result in the distribution of blood throughout the body.

When oxygenated blood leaves the left ventricle, it travels through the ascending aorta and the descending (thoracic and abdominal) aorta, into the branching arteries, then into smaller arterioles, and finally into capillaries.

The blood supply to many parts of the body have redundancies built in that allow for continued oxygenation even if supplying branches of arteries become blocked.

An example of this is the uterus, which has blood flow coming from the uterine arteries, but also has blood supply (collateral circulation) coming from above it, from branches of the ovarian arteries.

The brain has an entire circle of artery, called the Circle of Willis.

Not all organs or tissues enjoy the advantages of collateral circulation, and these are particularly at risk to cell death/organ failure if a sole blood supply is impaired in some way. For example, blood supply to the colon is at risk from an embolism that blocks the middle mesenteric artery.

Blood vessels are made up of different layers:

Between arterial and venous anatomy, there are differences in these three layers. The most dramatic difference is between the Tunica Media of arteries and veins: this layer is thicker in arteries than in veins.

Most blood vessels have 3 layers (tunics): 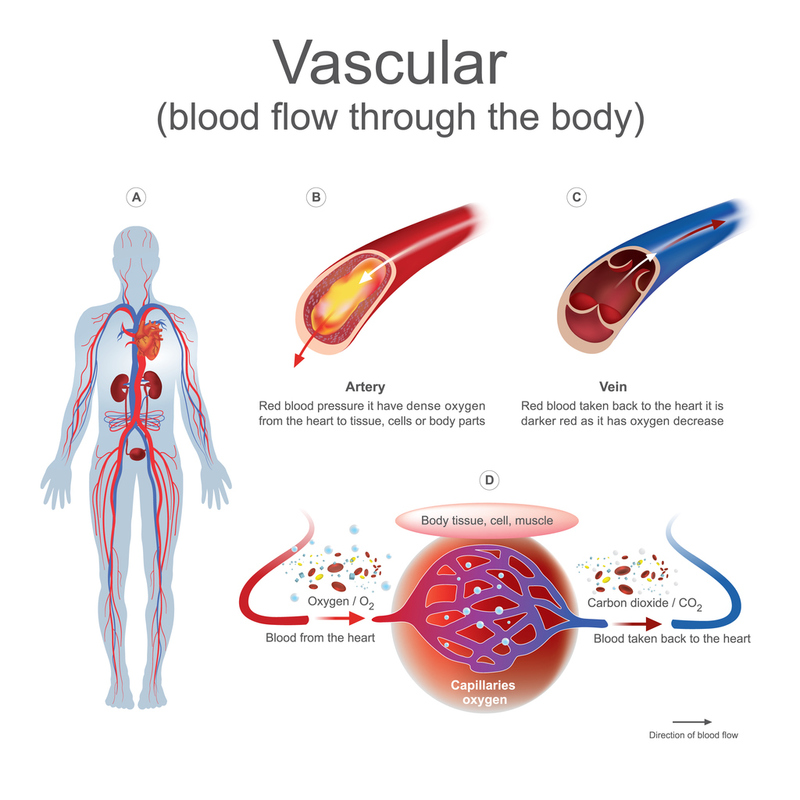 (arterioles) and the smallest tributaries of the venous system (venules), and that position makes them the site of gaseous exchange between CO2 from the veins and O2 from the arteries at the tissue cells where they meet. (Such an exchange is similar--but opposite--in the alveoli of the lungs)

Capillaries are much smaller and thinner than arteries and veins, with the walls of these vessels made up of only a single layer of endothelial cells--that is--only the Tunica Intima, allowing substances to quickly pass through them.

SIMPLE DIFFUSION: During homeostasis, gasses exchange between blood and cells at the capillary level through the process of simple diffusion. Oxygen-rich blood travels from the arteries to the capillaries surrounding a specific tissue. At the end of the connection, the oxygen-rich blood reaches a point where only a single one-cell thick wall separates the capillary and the tissue.

Concentration gradient difference between the oxygen-rich blood and oxygen-depleted tissue cells allows for the oxygen to diffuse or pass through the single-cell-thick wall, and into the tissue, in an attempt to equalize the gradient on both sides. The same thing happens for a waste product like carbon dioxide. The carbon dioxide-rich tissue cells, when in contact with carbon dioxide-depleted capillaries, diffuse the area of higher concentration to the area of lower concentration, in an attempt to equalize, causing the carbon dioxide to diffuse through the single-cell-thick wall and into the blood to be excreted from the body elsewhere.