Next Unit: Introduction to Basic Pharmacology

When administering medication or assisting patients in taking their own prescribed medications, always remember that you are an extension of a doctor's treatment and you must utilize medical direction from both the online communication (with the doctor in real-time via phone or internet) and offline written standing orders or protocols established in advance. When using online medical direction, make sure to confirm all doses and orders to make sure you have received them correctly.

When administering a medication, you should know the 5 "rights"! Check and double check these!

After your medication has been delivered, make sure to reassess the patient to evaluate what effect the drug is having, how effective the drug is at solving the problem, and the current state of the problem. Document the times, your data, the doses administered, and the follow-up assessment after the drug has been administered.

Drug effect can vary widely based upon the route of administration. Always make sure that you're using the right dosage for the right route that is correct for your patient.

ENTERAL ROUTE: That administered via the GI tract, from oral to rectal, with the drug being absorbed by the digestive tract.

Oral: Giving medications orally has the advantage of being easy and patient preferred, but it isn't useful in patients who are unconscious. Also, oral drugs are absorbed more slowly than other drugs, delaying their effect. Another downside is that some drugs are not absorbed well on a full stomach, while others need certain foods (fat) to be transported into the circulation from the GI tract. Also, oral drugs will pass the liver first for some degree of metabolism before having the intended effect.

Nasogastric tube: a variation of the oral route.

Rectal: There are still times when the rectal suppository might be necessary, especially in end-stage cancer patients without IV access.

Sublingual: Even though sublingual is technically an enteral route of administration, its actual mechanism is more like parenteral, since it involves dissolving the medication under the tongue to be carried into the circulation directly, bypassing the enteral-hepatic first-pass of metabolism. It is rapid also, in keeping with its parenteral-like mechanism of ingestion. It is similar to inhalational administration [SEE BELOW].

PARENTERAL ROUTE: All other routes that bypass the GI tract, including injections and inhalations. Different injection types are:

Intramuscular (IM): IM injection may have a faster onset and may require a much different dose as compared to oral or IV. IM injections have faster rates of absorption than subcutaneous because muscle has more and larger blood vessels to carry the medication away.

Common IM injection sites are the deltoid and the ventrogluteal site (hip).

Generally, the deltoid is used for injections up to 1 ml., and the ventrogluteal site is recommended for larger volumes.

Intravenous (IV) injections. An IV is a direct injection into the vein. This is the 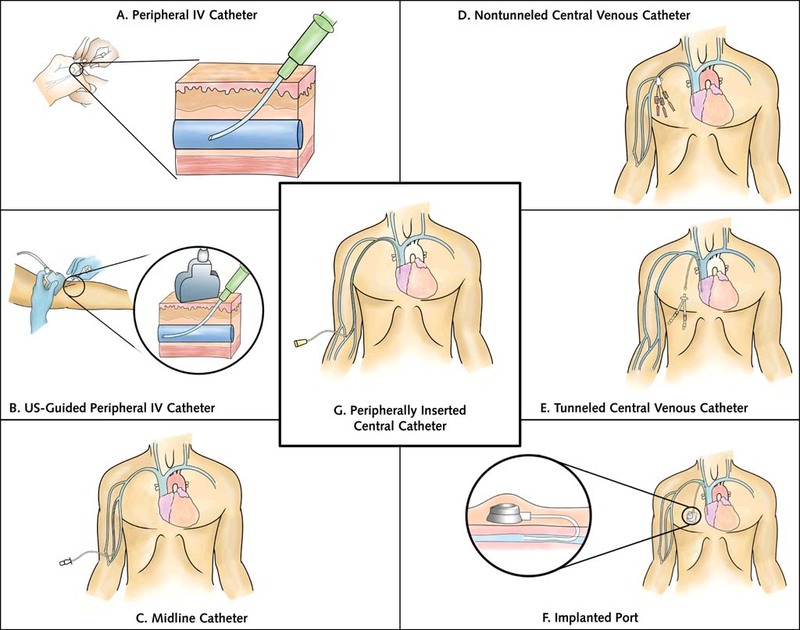 Peripheral IVs are intravenous catheters placed inside a peripheral vein used to deliver medications directly into the bloodstream.

Always clean the area prior to IV insertion.

Peripheral IVs, when there is aspirate return of blood and then flow ensues wihout swelling of tissue around the vein, are considered placed properly. If flow stops, think of the simple things, first: blood pressure cuff or tourniquet still on, venous valve against the catheter tip, etc.

Central lines involve a catheter entering a vein superficially and being long enough to reach deeper veins closer to the heart, such as the jugular or subclavian veins. They are used in chemotherapy, dialysis, for monitoring cardiac conditions, and when peripheral IV access is challenging due to hypovolemia.

Tunneled catheter: surgically inserted into a vein and passed under the skin to outside.

Implanted port: a tunneled catheter but with the input end entirely under the skin. A reservoir can hold medication that is then slowly released.

Complications of central lines include

Intraosseous (IO) Intraosseous infusion (IO) is a direct injection into the marrow of a bone to access the venous system and is used when IV access is unavailable.

IO insertion is contraindicated in tibial or other long-bone fractures (in the limb that is fractured).

Inhalation: Inhaled drugs are absorbed very quickly because of the large surface area within the lungs, and they skip the "liver first pass," but absorption of your desired dose can be in-exact based upon how deep a breath your patient takes.

Vaginal: Uses the rich vascularity of the vaginal mucosa to absorb medication; menopausal women may not absorb via this route effectively.

Transdermal: uses an agent to allow transport through the epidermis and dermis.

IM, SC, and any other "puncture" techniques require aseptic technique, usually requiring only a swab of isopropyl alcohol on the skin. For more surgically involved insertions, i.e., placement of a central line, sterile technique is required--prepping the skin appropriately with sterilizing solution.

With longer lines, i.e., central lines, remember the "dead space" along the catheter.

The dead space is the space between the input end and the actual output end into the venous blood, usually a few milliliters depending on what type of line it is. This is why the 2nd (after medication) saline flush is necessary, to clear the medication from the dead space into the circulation in order to confirm administration of all medication.

SubQ CAVEAT: As a rule, never give more than 1 ml of any drug subcutaneously. According to studies cited by the NIH, it should be < 1.5 ml; more will increase the pain of injection, distort the anatomy, and add to adverse reactions.

Before giving any drug, run through your mental exercises as to what you would do if there's an allergic reaction or unexpected side effects. Do your internal panic BEFORE giving the drug so you'll be prepared immediately to deal with surprises in a controlled, professional way.