Next Unit: The Mechanics of Respiration 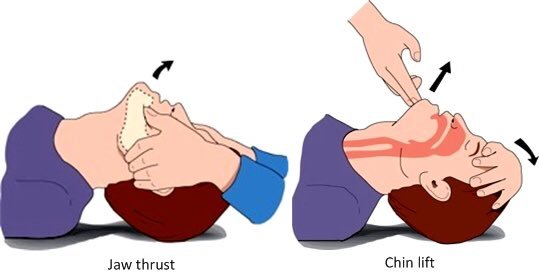 Unresponsive patients should have their airway opened and maintained manually. Non-Traumatic mechanisms of injury should lead to the usage of the head-tilt and chin-lift technique. While patients with Traumatic injuries that may compromise the C-spine are limited to the jaw-thrust technique. This prevents the potential worsening of an unstable spinal injury. If the airway cannot be maintained with a jaw thrust in a spinal trauma patient, it is appropriate to carefully perform the chin-lift maneuver and manually hold C-spine alignment with the head tilted. This is allowed due to the patency of the airway being one of the key aspects of survival.

AIRWAY STATUS: The only absolute indicator of airway status in unresponsive patients is the movement of air. Seeing condensation in oxygen masks, feeling air movement, and using end-tidal CO2 monitors are all good ways of ensuring ventilation is occurring.

DANGER SIGNS: Snoring, gurgling, choking, and coughing are all potential indicators of compromised airways in unconscious patients. If these are occurring it would be wise to reposition the patient or consider airway-related interventions.

The best sign of airway patency in responsive patients is the ability to hold a conversation without changes in the voice or feeling of breathlessness. However, a patient's airway may still be at risk even when they are conversational. Foreign bodies or substances in the mouth may impair the airway at a later time and must be removed.

Stridor is a common sign of airway narrowing, generally due to partial obstruction by a foreign body, swelling, or trauma. It is defined as a high pitched whistling sound upon inspiration.

BRADYPNEA: A slow RR is generally the result of neurological compromise, since the RR is closely controlled by the hypothalamus this is generally the sign of a severe condition. Suspect drug overdose, spinal injury, brain injury, or a severe medical condition when encountering a slow RR.

TACHYPNEA: A fast RR is most often the result of physical exertion. Medical illness and airway obstruction are other common causes. Tachypnea can lead to imbalances in the body's acid-base status or exhaustion of the respiratory muscles.

APNEA: An absence of breathing should be treated with a re-assessment of the airway followed by rapid initiation of mechanical ventilation, generally via bag valve mask. Patients that are gasping occasionally should be treated as apneic until proven otherwise.

Breathing that is abnormal should be treated. The definition of abnormal is broad, look for the following.

Management of abnormal breathing occurs in the following steps:

(In the majority of cases management will consist of regular re-assessments of the airway and administration of oxygen until transfer to a higher level of care.)

Pediatric patients and geriatric patients have different demands for oxygen when compared to average middle-aged adults. This leads to differences in normal values for respiration rate, depth, and quality.

PEDIATRIC: Pediatric patients breathe much faster than middle-aged adults but have less volume to each breath. The exact expected respiratory rate varies significantly with age. Know that newborns should be at 30 to 50 bpm, and children one-month-old to 12 years old should be between 30 and 20. Pediatric patients with abnormal breathing can rapidly decompensate and become life-threateningly unstable with little warning.

GERIATRIC: Geriatric patients commonly have an increased need for oxygen given naturally declining lung function and the common presence of underlying medical issues. This leads to a wide normal range. Healthy elderly patients should be at a rate of 12 to 18, while unhealthy patients can be as high as 25 and still be considered normal if otherwise asymptomatic. Like pediatric patients, an elderly patient with abnormal breathing can rapidly decompensate even if seemingly stable.

PREGNANCY: Pregnancy makes breathing more difficult. The increased upward pressure from the growing fetus restricts the downward movement of the diaphragm, naturally, the difficulty of breathing increases the further along the woman is in pregnancy. In the third trimester, many women make increased use of the accessory muscles which can cause costochondritis.

Recumbent (lying or reclining) positions worsen pregnancy-related breathing difficulty. Dyspnea due to pregnancy can likewise be relieved by sitting the patient up or elevating the head-of-bed to a 45° or greater angle.

Patients with twins or triplets may require supplemental oxygen due to the significant growth of the uterus. This can occur as early as the second trimester.