Next Unit: Epinephrine as a Treatment for Anaphylaxis

The incidence of common or major immune system disorders in the United States, including anaphylaxis, varies by reporting agency but is estimated to be between 50-200 episodes per 100,000 people per year, with upwards of 1,500 deaths per year. Both the incidence and prevalence are increasing.

Anaphylaxis is defined as a serious allergic or hypersensitivity reaction that is rapid in onset and may cause death. It is an acute, life-threatening, systemic syndrome caused by the sudden release of mast cell mediators into the systemic circulation. Even a very limited exposure to a very small amount of allergen can trigger anaphylaxis.

Allergic reactions, in contrast, are localized to one or several areas of the body and are rarely life-threatening.

In anaphylaxis, mast cells (and basophils) and IgE are THE problem.

Because anaphylaxis and anaphylactoid reactions can be clinically indistinguishable, the World Health Organization has discarded these two names and now refers to them as:

The reason for this change is that many assumed that anaphylactoid reactions were less severe, which is not the case. The WHO, therefore, called both of them "anaphylaxis," with the two sub-types.

Mast cells come from stem cells that reside in the bone marrow and spleen, and they end up in varying numbers in practically all tissues. They are positioned as sentinels at the body's portals of entry within mucosal membranes lining the respiratory, digestive, and urogenital systems, throughout the dermis, and surrounding blood vessels. Mast cells reside within the connective tissue of these and all vascularized organs.

Their highest density is at the interfaces between the internal and external environments where they can respond to foreign organisms and antigens, providing a sentinel function.

Mast cells contain cytoplasmic granules, containing macromolecular complexes of proteoglycans and proteases. As an important part of the innate immune system, they assist in the innate defense against certain bacterial and viral infections by releasing pro-inflammatory cytokines. They also produce antimicrobial peptides which disrupt microbial membranes.

Mast cell-derived cytokines--especially tumor necrosis factor (TNF)--result in early and effective recruitment of neutrophils and other leukocytes to sites of infection.

The degranulation of mast cells (and basophils) results in the systemic release of various biochemical mediators and chemotactic substances, including:

Mast cells in allergy: Activation results in both an early and a delayed phase of inflammation. 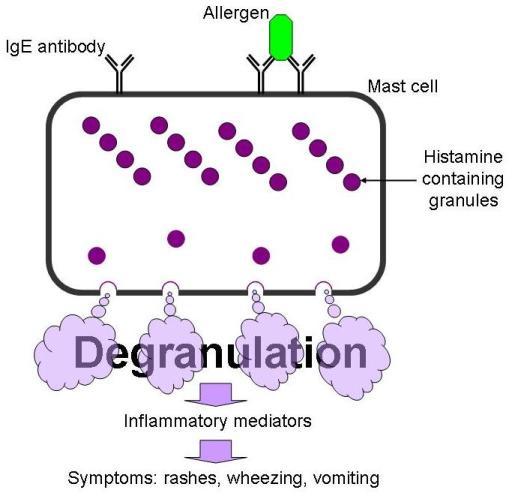 How to make IgE:

Mast cell activation occurs via the IgE receptor where IgE is linked to an antigen. This is a strong stimulus for degranulation and release of preformed mediators, as well as the production and subsequent release of leukotrienes, prostaglandins, and cytokines, including numerous chemokines.

Anaphylaxis is a sudden and severe allergic reaction that occurs within minutes of exposure. It is a rapidly progressing, life-threatening systemic allergic reaction and most often results from IgE-mediated reactions to foods, drugs, and insect stings, but any agent capable of inciting a sudden, systemic degranulation of mast cells can produce it.

Common causes of anaphylaxis are:

Anaphylaxis is an acute systemic (multi-system) and severe Type I Hypersensitivity allergic reaction.

In a type 1 hypersensitivity, the antibody is IgE instead of IgA, IgG, or IgM.

Hypersensitivity reactions are classified into the following 4 types:

Type I: immediate hypersensitivity reactions that involve immunoglobulin IgE–mediated release of histamine and other mediators from mast cells and basophils. Example: anaphylaxis.

Complications, besides death, include biphasic anaphylaxis, which can occur in 1 out of 5 cases of anaphylaxis, and shock.

DEFINITION, BIPHASIC ANAPHYLAXIS: recurrence of symptoms that develop after resolution of the initial anaphylaxis without additional exposure to the trigger

Shock: both distributive and hypovolemic shock (with tachycardia): organ system failure due to shock-heart, shock-vasculature, shock-lungs, resulting in circulatory collapse or respiratory arrest.

Immediate medical attention is needed for this condition. The primary cause of mortality in anaphylaxis is airway compromise and/or cardiovascular collapse. It can get worse very, very fast and lead to death within 15 minutes if treatment is not received.

To emphasize this, in fatal anaphylaxis, median times to cardiorespiratory arrest are

EMR Management of a patient in anaphylaxis includes

EPINEPHRINE IS THE FIRST AND MOST IMPORTANT TREATMENT FOR ANAPHYLAXIS, administered as soon as anaphylaxis is recognized to prevent progression.

In the field, the following are important steps:

Lips, tongue, and oral pharynx are assessed for angioedema, and the patient is asked to speak his or her name to assess peri-glottic or glottic swelling.

If the upper airway is not edematous, the patient should be placed in the recumbent position with the lower extremities elevated to maximize perfusion of vital organs (pregnant patients on their left side).

Intubation if the airway is compromised.