A&P OF THE BRAIN AND SPINE

SPINE: The spine is made up of individual vertebrae. They articulate with each other, forming a giant joint which protects the spinal cord while also allowing rotation, flexion, and extension. Spinal segments are named with a letter and number, e.g., C1, C6, T10, L3. Understanding the basic anatomy of the spine is essential for the management of trauma. 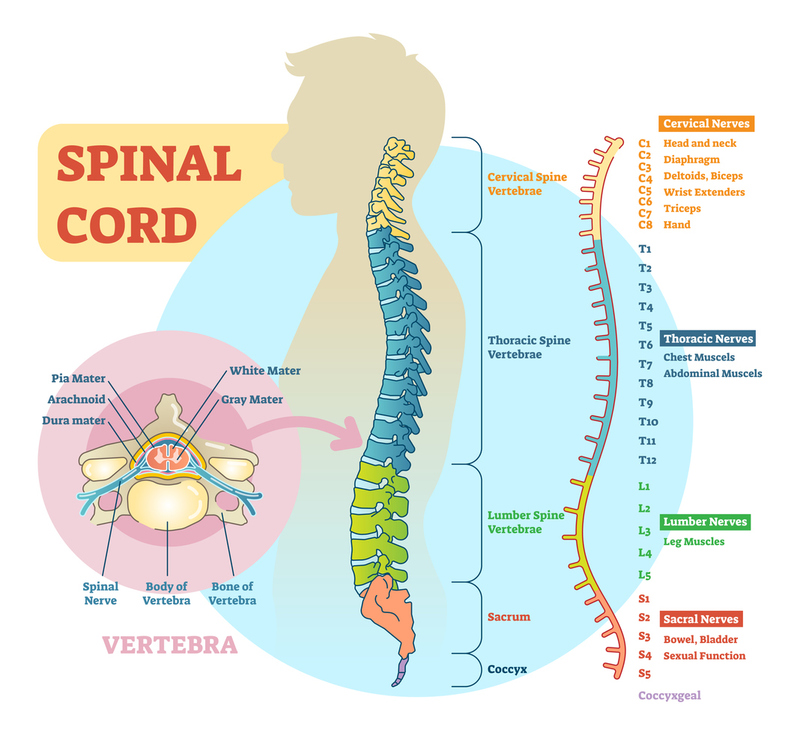 SPINOUS PROCESS: The protrusion from the rear (dorsal aspect) of each vertebra which acts as an anchor point for the muscles of the back.

CERVICAL SPINE: named C1-C7 and are the uppermost 7 vertebrae that make up the neck and base of the skull.

THORACIC SPINE: named T1-T12 and are the middle 12 vertebrae; these have attachments for the ribs. It is important to remember that

LUMBAR SPINE: named L1-L5, the lower 5 true vertebrae (below the ribs); these bear the weight of the entire upper body.

SPINAL CORD: a collection of nerves which communicates information to and from the brain and to and from the remainder of the body. It is considered a component of the central nervous system (CNS).

SPINAL FORAMINA (singular, foramen): the holes along each spinal vertebra that allow the exit for the nerves originating from the spine.

Its nerve delineations are according to the vertebral segments, but its length is skewed shorter, meaning the actual cord ends at about L2, with the remainder of the nerves (associated with L2 downward having to run inferiorly to reach their respective foramina, bunched together as the cauda equina, or "horse's tail."

KYPHOSIS: abnormal convexity of the spine ("hunch back").

LEVEL OF SPINAL CORD INJURY: Damage to the spinal cord and its associated vasculature is a feared complication of any traumatic injury. Spinal cord injury that interrupts the signal from/to the brain to that part of the body associated with that spinal segment will manifest according to the level of spinal cord injury: 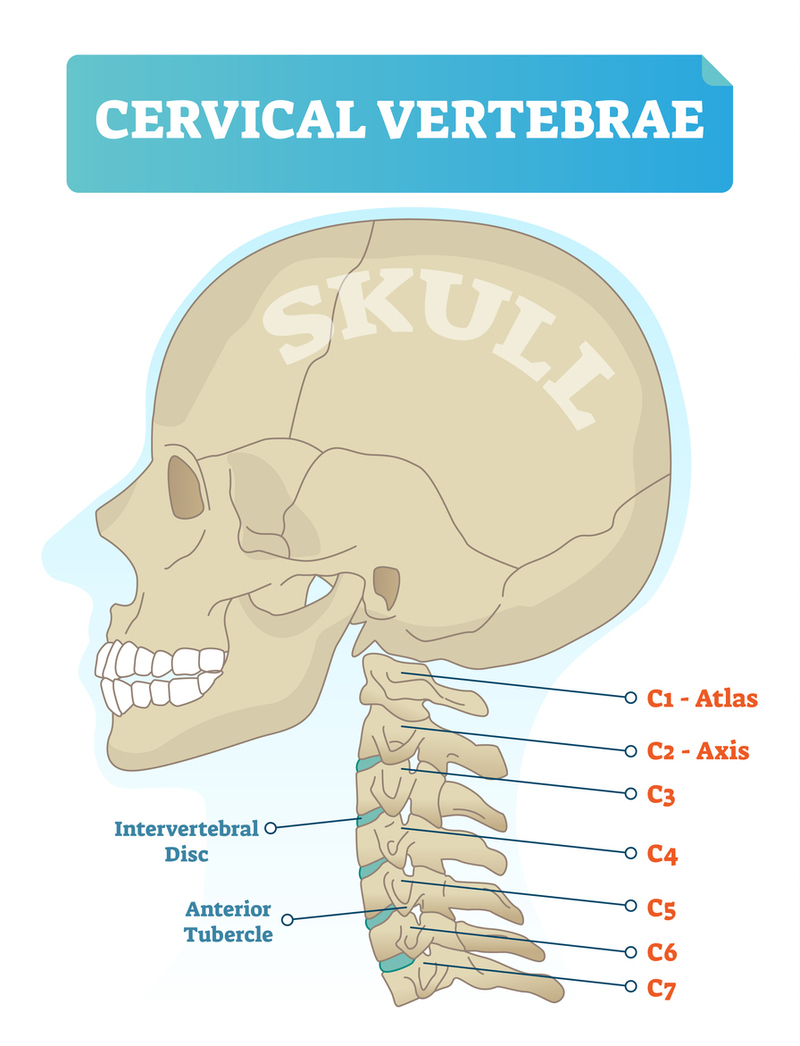 In the field, the noteworthy assessment is whether speech and breathing are impaired. If so, suspect a high cervical fracture.

SKULL: The skull is made up of many individual bones, coming together after birth in areas called suture lines, which fuse to act as one large bone, protecting the brain, eyes, and oral/nasal passages. 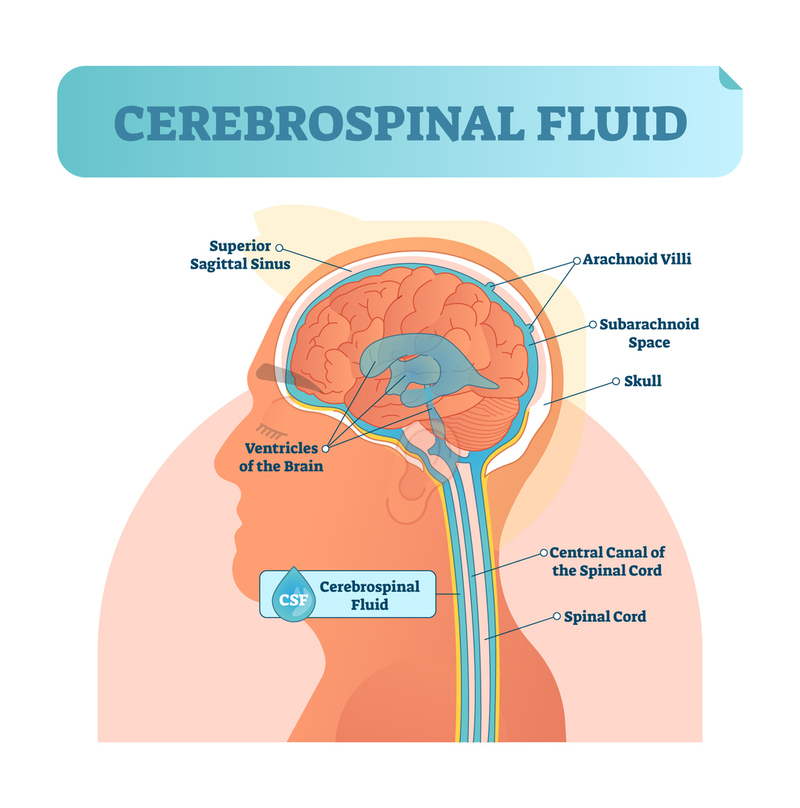 The meninges are part of the blood-brain barrier (BBB), responsible for filtering out bacteria, viruses, and even some medications from passing from the body into the intrathecal space (spine and brain).

GRAY MATTER: The cell bodies of the neurons in the brain and spine, responsible for generating/propagating electrical signals. Gray matter is found throughout the brain and in the center of the spinal cord.

WHITE MATTER: The long "wires" (axons) that connect the grey matter to other grey matter or to the peripheral nerves. It is “white” due to the large amounts of fat (myelin) that acts to insulate the axons. White matter is found between major areas of the brain and the periphery of the spinal cord.

In the spinal cord, the gray matter containing the neuronal cell bodies occupies a butterfly-shaped central region, and the white matter tracts surround it.

In the brain, white matter is made of axons connecting different parts of gray matter to each other.

BRAINSTEM: The brainstem is responsible for maintaining homeostasis, regulating almost every function that keeps our bodies alive, e.g., heart rate, breathing, temperature, plus all gastrointestinal (GI) and genitourinary (GU) functions.

CEREBRUM: The cerebrum is responsible for consciousness and the processing of 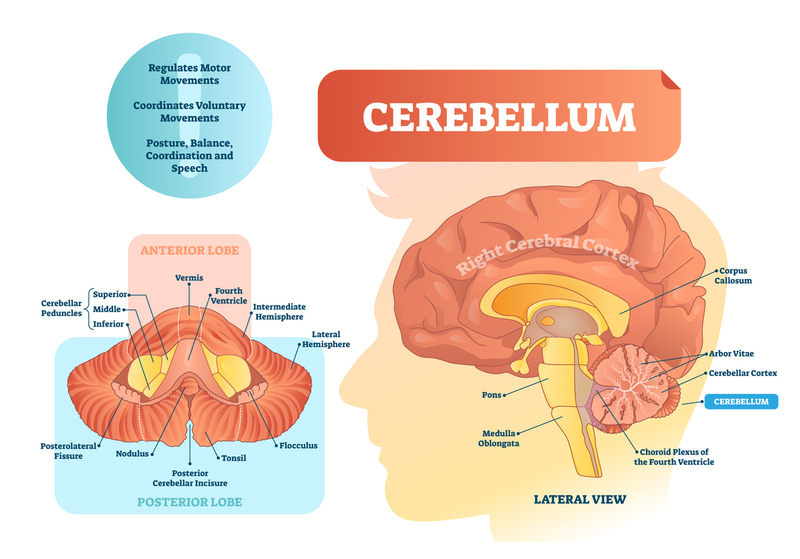 information, known as “higher brain functions.” It is divided into mirrored right and left sides, with four named lobes on each side:

CEREBELLUM: Latin for “small brain,” located below the occipital lobe at the base of the brain behind the brainstem. Responsible for fine motor movements and coordination of multiple muscles to create a single smooth action.

BASAL (Basilar): a fracture of the bones that make up the base of the skull, most commonly the temporal bone; commonly includes rupture of the meninges and leakage of CSF.

It is a must-not-miss diagnosis, which can rapidly lead to death. There is really nothing else (other than a penetrating injury to the ear, e.g., pencil, etc.) that can cause blood to be seen coming from the ear(s).

The Halo Test: Bloody discharge from the nose or ears can have CSF in it. The Halo Test involves just observing the blood drop on linen. Since blood is more viscous than CSF, the CSF expands beyond the border of the blood drop, resembling a halo. Absence of a halo does not rule out a basal skull fracure: any blood from the ears is considered a basal skull fracture till proven otherwise (after arrival at a facility).

COMPRESSED: a depression or sunken-in spot on the skull, usually secondary to blunt force trauma and often associated with

OPEN: removal of a portion of skull leading to exposure of the brain or meninges, most commonly secondary to penetrating trauma.

LINEAR: most common skull fracture--a simple line through the entire thickness of the skull.

Brain injuries have a varied presentation; however, no matter the injury, certain signs and symptoms warrant further medical evaluation:

CONCUSSION: The mildest form of traumatic brain injury, commonly due to blunt force and resultant compression of the brain against the inside of the skull. Defined by short-lived neurological impairments:

An acute headache, nausea, vomiting, and ataxia are common. Loss of consciousness is considered a red flag and requires imaging. These patients must be observed for 24 hours following the injury to watch for evolving deficits.

NOTE: Post-concussion syndrome--Adults with a diagnosis of concussion had an increased long-term risk of suicide, particularly after concussions on weekends (no kidding).

CONTUSION: “bruising of the brain,” usually secondary to blunt force injury. Contusions can present with symptoms as mild as a headache all the way to coma and death, and can progress from mild to severe symptoms over minutes or hours.

Assessment should focus on suspicion for increased intracranial pressure (ICP), most commonly presenting with:

TRANSTENTORIAL HERNIATION: the most feared complication of ICP, presenting with

All patients with head trauma require repeat evaluations to rule out formation of a space-occupying lesion.